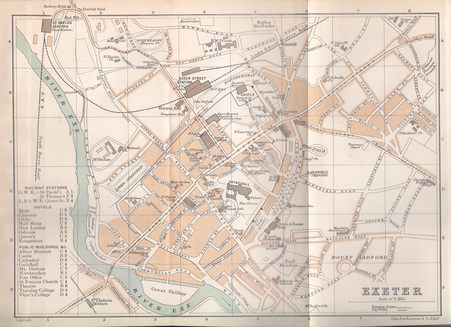 I came across the old guide to Exeter today and was interested to find a detailed street map inside, showing the city as it was in 1908. There are many things that immediately strike the eye – features on the map that have since vanished, or familiar landmarks that were not even a twinkle in the cartographer’s eye 106 years ago. Among the former I might include lost churches such as All Hallows (demolished 1951), St Edmund’s (the ruined tower of which remains prominent by the Exe Bridges), St Lawrence’s in the High Street (bombed in May 1942) and St Mary Major (demolished 1971, exposing the Roman Bath site that is currently being mooted for restoration), lost pubs and hotels – the Half Moon (opposite St Lawrence’s) or the Bude Hotel at the top of Paris Street – the Tramway Depot at the top of Heavitree Road, the New Theatre and the Hippodrome (both long gone, leaving a vacuum in the city centre that remains to be filled.)

Old maps possess a power to fascinate that, in itself, I find intriguing, rather like the way in which newspapers are always more interesting when they’re spread out on a damp floor or lining carpets. I hadn’t realised until today that the cattle market used to be down by the river, nor that there used to be a pleasure ground on the riverbank alongside Bonhay Road – the satisfaction gleaned from such discoveries is one of the great pleasures of studying old maps, but it differs from the Pleasure in Ruins that I wrote about in my last blog post, even though they both tantalise us with suggestive hints about what-has-been-and-is-no-longer.