Henry Lehrmann with a folding camera (probably a Premo Pony) in ‘Making a Living’ (Lehrman, 1914), Charlie Chaplin’s first movie
On Sunday I travelled up to the historic village of Lacock to give a talk about the way photography has been depicted in the movies, discussing over 100 films from 1914 (above) to the present day. My talk was delivered in the village hall, just a few hundred yards from Lacock Abbey where William Henry Fox Talbot produced the earliest surviving photographic negative in the summer of 1835. 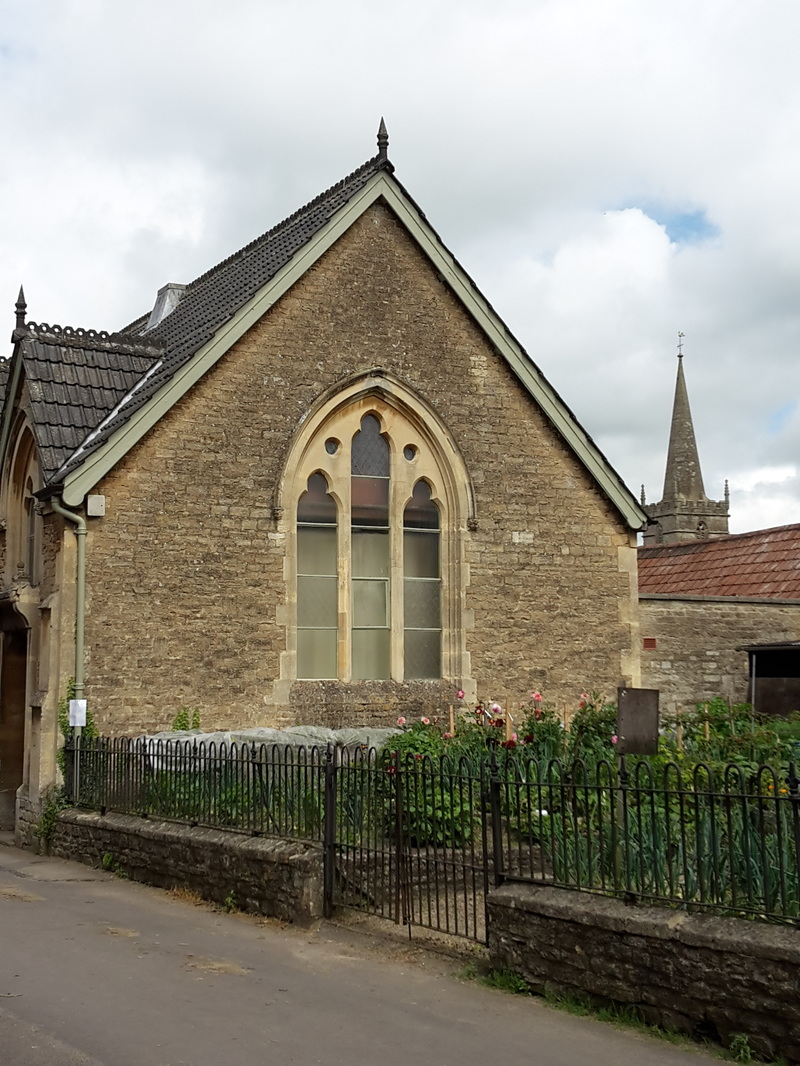 Lacock Village Hall, with the spire of St Cyriac’s peeking up behind

Sign above the door; unsure if my talk could be classed as entertainment, but hopefully the audience enjoyed it as much as I did
My talk looked at the way photography has been portrayed in the movies, focussing on three main areas : 1) hardware – trying to identify the cameras used, and discussing the accuracy of the models 2) processes – were the film-makers interested in the working methods of photographers, such as as how to hold and shoot a camera, or darkroom techniques? 3) the photographer as a personality – how do the movies portray photographers as people? are their characters generally positive or negative? has the pattern changed over the decades? 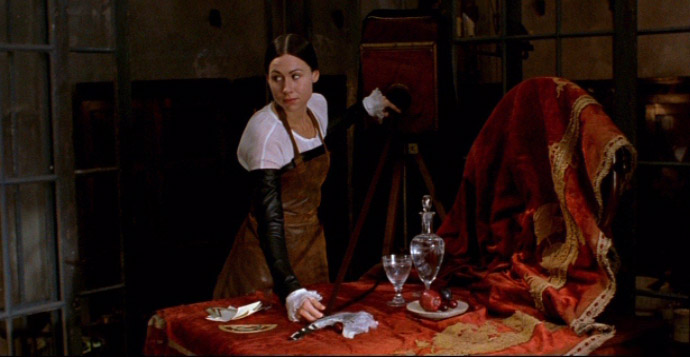 Rosina da Silva (Minnie Driver) solves one of the most problematic challenges faced by pioneer photographers such as Talbot – the fading of prints – in ‘The Governess’ (Goldbacher, 1998) 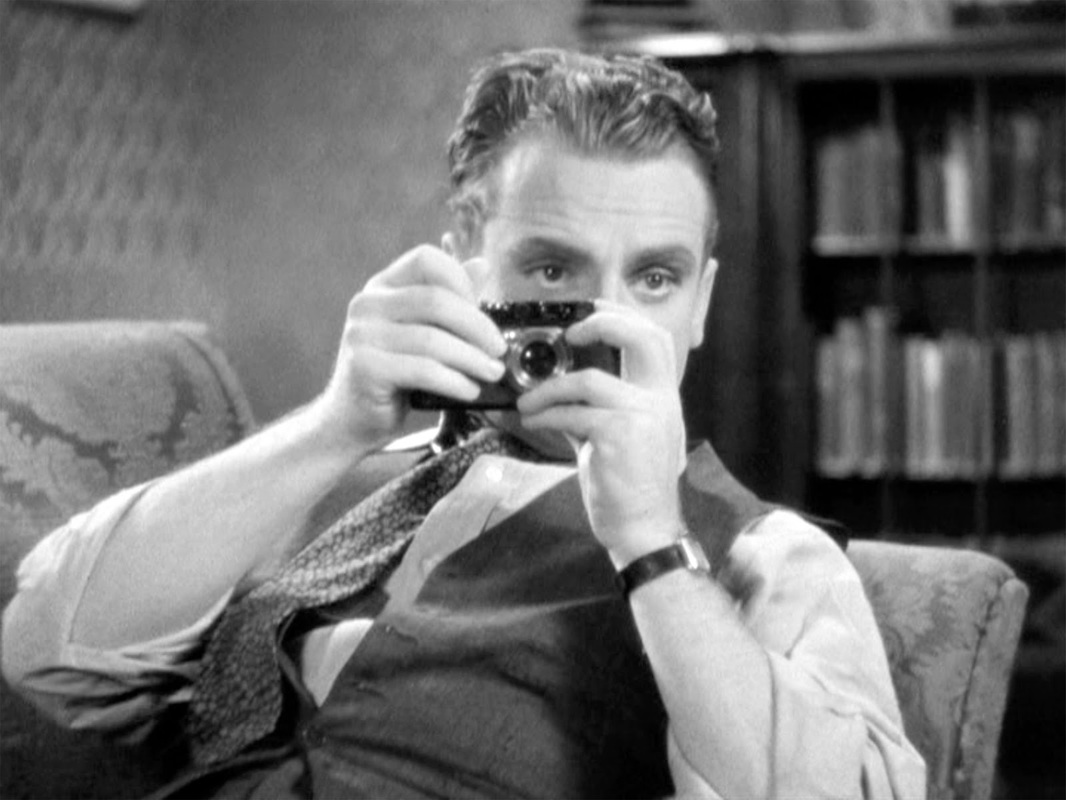 Danny Lean (James Cagney) swaps his gun for a Leica II in ‘The Picture Snatcher’ (Bacon, 1933) as former criminal tries to go straight.
The talk took a roughly chronological approach, but was arranged thematically too, with sections discussing different categories of photographer: the amateur (including spies and criminals), commercial worker (portrait studio, glamour), press – both paparazzi and investigative reporters – with a special slot for war journalism. 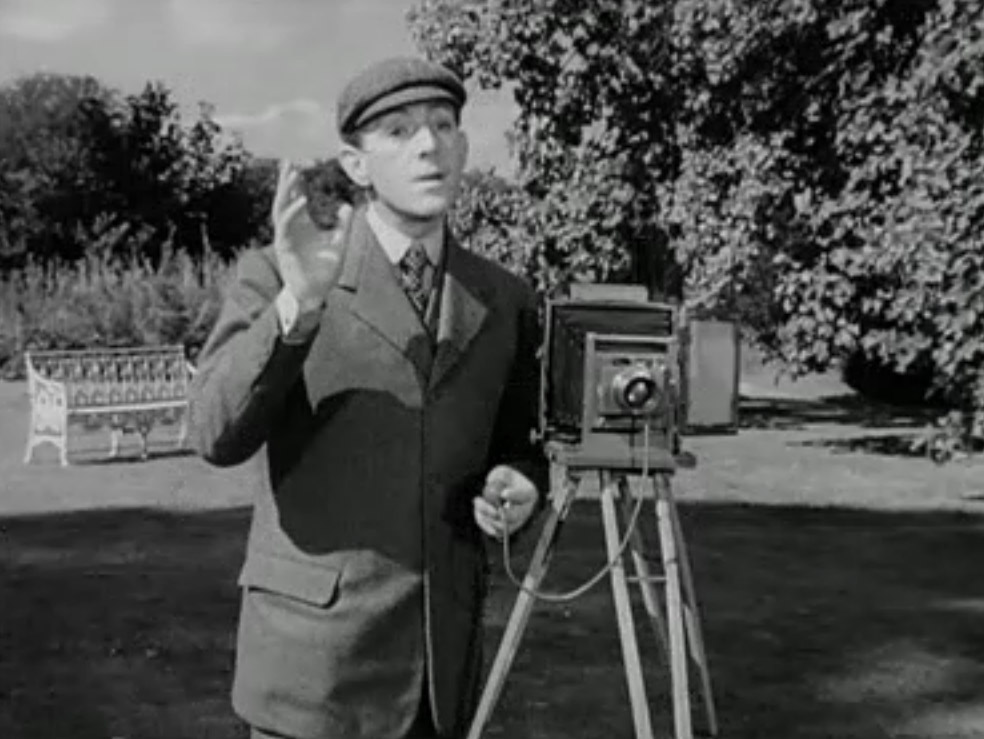 Alec Guiness as Henry D’Ascoyne in ‘Kind Hearts and Coronets’ (Hamer, 1949), with his Sanger Shepherd
Dozens of film stills and clips were shown, and a handout listed over 140 movies, with details of the character, actor and camera. The list was by no means exhaustive – there are another thirty odd films in my notes still to be added, and two more films occurred to me while driving to Lacock! 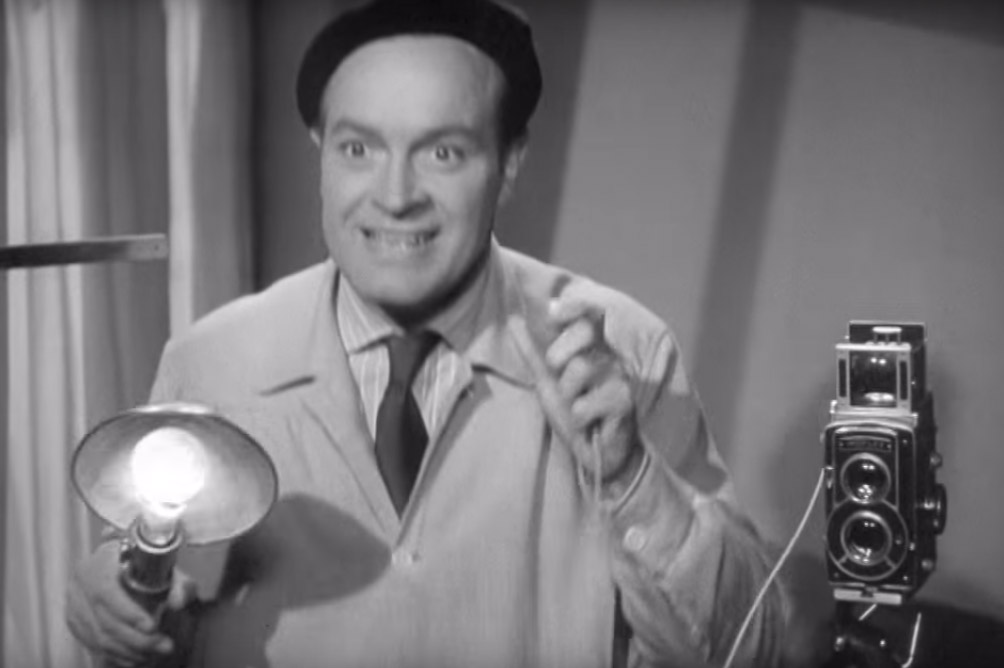 Bob Hope as baby photographer Ronnie Jackson, operating a Zeiss Ikoflex in My Favourite Brunette (Nugent, 1947)
Although due space was given to iconic films such as ‘Rear Window’ and ‘Blow Up’, I really wanted to showcase as many lesser-known movies as possible. 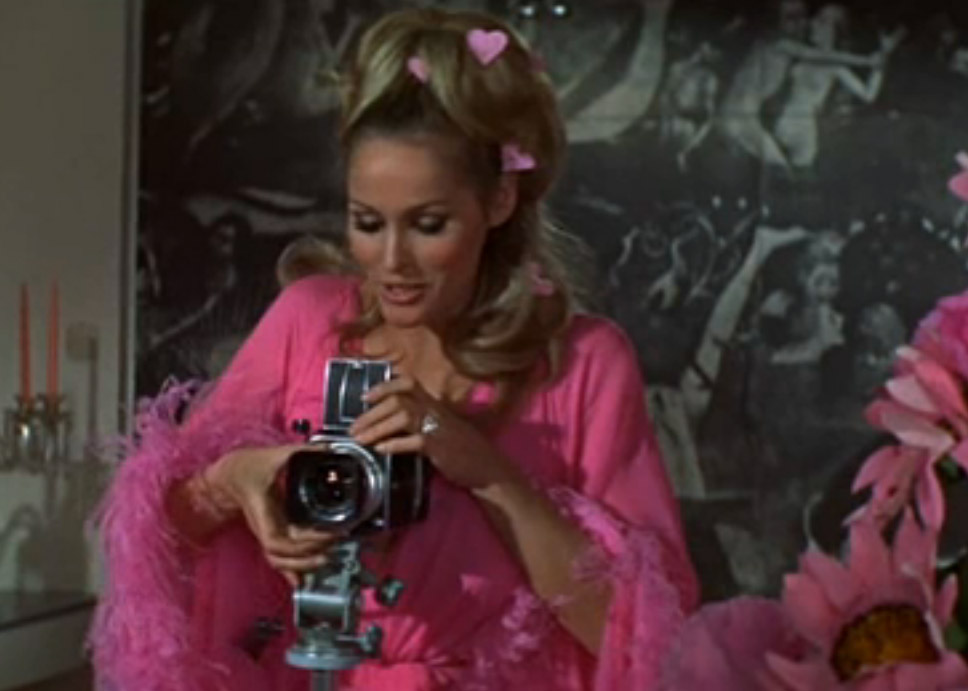 The wonderfully-named Vesper Lynd (Ursula Andress), shooting Peter Sellers with a Hasselblad in the Bond spoof ‘Casino Royale’ (Hughes et al, 1967)
The sheer range of movies and variety of photographic activities made for a colourful presentation – although few of my photographers were dressed quite as colourfully as Ursula Andress here. 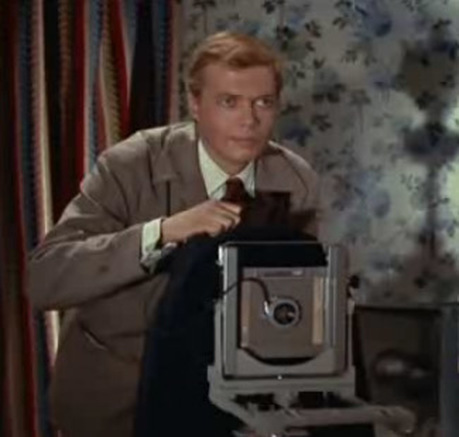 Carl Boehm as Mark Lewis in ‘Peeping Tom’ (Powell, 1960), one of several films I discussed that depict the dark side of photography

One of numerous anomalies highlighted in my talk: Ryuichi Sakamoto (Amakasu Masahiko) shooting with an Exakta VXIIa (or b) during a scene set in 1934 – many years before this particular camera was issued. 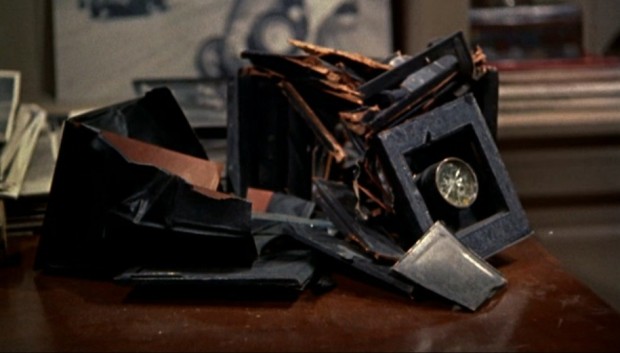 Like the camera above –  from ‘Rear Window’ (Hitchcock, 1954) – all good things must come to an end, and I wound things to a close after speaking for over ninety minutes, far longer than intended.
Please follow and like us: