Today I seized the opportunity to see The Curse of Frankenstein on the big screen, courtesy of Exeter Picturehouse as they show a number of films tying-in with the BFI’s current Gothic season. Before the film started there were only two of us in the cinema and I wondered if this was going to be like a previous experience many moons ago at the Grosvenor in Glasgow’s Ashton Lane, when I watched The Silence of the Lambs in the company of one other lone stranger sitting a few rows back in the dark. Given the nature of the film, the two of us kept exchanging suspicious glances every now and then…just in case. The Silence of the Lambs contains far more graphic horror than The Curse of Frankenstein but in 1957 several critics were appalled at Hammer’s ‘depressing, degrading’ movie. How does it stand up today? 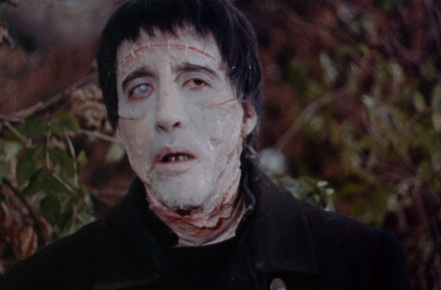 This was the first horror film in which Peter Cushing and Christopher Lee appeared together, and the pair would co-star in around twenty others, many of them Hammer productions. For copyright reasons Hammer needed to distinguish their imagery from James Whale’s 1931 classic, and make-up artist Phil Leakey made Christopher Lee look very different from Boris Karloff’s creature. The contrast is more than skin deep, however – Lee plays the creature as a brain-damaged monster, with little apparent capacity for thought or emotion; it is hard for modern audiences to feel much sympathy for him, especially given the creature’s lack of screen time. The physicality of Lee’s performance is astonishing nonetheless; jerking, flailing and lurching, he captures the tragedy of a being unable to controls its own limbs.

The real monster of the film is Victor Frankenstein, who is prepared to sacrifice everything – ethics, friendship, his fiancee, mistress and unborn child – for science. Peter Cushing’s performance is impeccable; the subtlety of his facial expressions seemed much more impressive on the big screen. He returned in this role for another four films, all directed by Terence Fisher: The Revenge of Frankenstein (1958), Frankenstein Created Woman (1967), Frankenstein must be Destroyed (1969) and Frankenstein and The Monster from Hell (1974.) In 1958 he played Von Helsing opposite Lee’s Count Dracula, and the two of them would continue to reprise these roles – with constant variations – over the next two decades. Hammer Film Production’s reputation as purveyors of luridly-coloured Gothic gore began with The Curse of Frankenstein and the film contains motifs that would recur again and again in the studio’s output.

Talking of lurid colour, the brilliant palette of Jack Asher’s lush cinematography is particularly impressive on the big screen. Although Hammer had already used colour in Men of Sherwood Forest (1954) this was the first colour horror film that they made. There has been criticism of the anaemic quality of the colour on the recently restored Blu-Ray dvd version, but such shortcomings were not apparent in today’s screening. The film was made using Eastmancolor, a single-strip technique invented by Kodak in 1950 that was far more cost-effective than the cumbersome three-strip Technicolor process; it is, however, more prone to fading over time. The unprecedented combination of horror and colour was something new, and I was struck during today’s screening by a number of scenes that seemed to celebrate the power of colour: 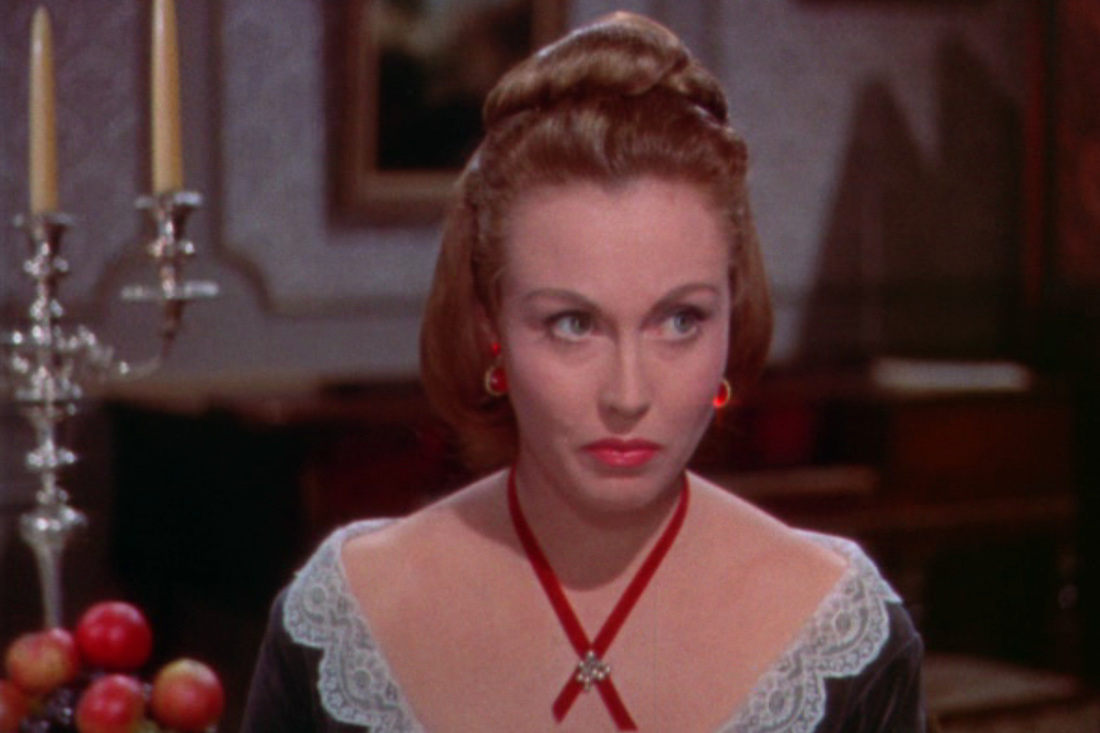 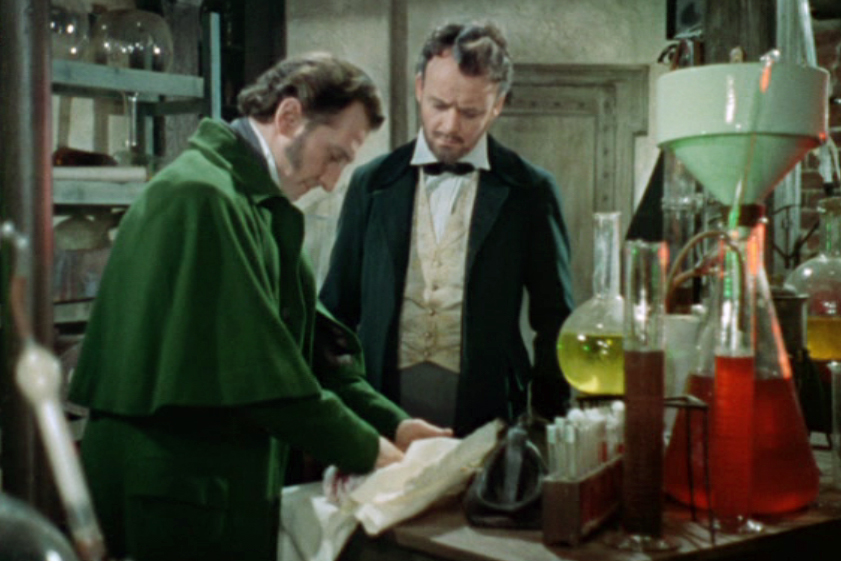 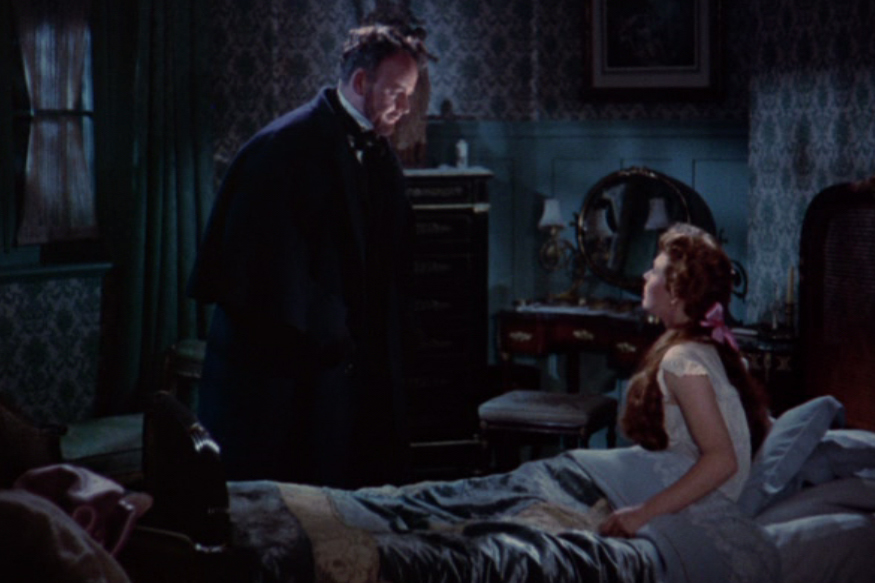 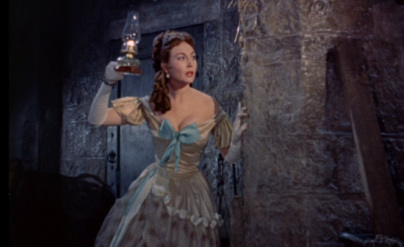 The Lady with the Lamp

Another highlight of the film was the lovely – if rather underused – Hazel Court, playing the part of Frankenstein’s fiancee Elizabeth. She gets to wear a series of ravishing costumes in the film, of which the gown below is probably the finest. Not ideal for grubbing around a dungeon full of chemicals, but certainly a feast for the eyes. Hazel was a classically trained actress and had done several films before The Curse of Frankenstein – hence my regret that her character is so under-developed. Elizabeth is a typical heroine-victim in the Gothic tradition, entering a house of horror (both building and family lineage, as in the House of Usher) through marriage, and thereby trespassing upon dark secrets that threaten to engulf her. A comment by Paul Krempe indicates that Frankenstein had forbidden Elizabeth to look behind his laboratory door – a prohibition that recalls the legend of Bluebeard’s Castle – but of course she does…

Certain elements of the plot are reminiscent of other Gothic narratives, and there is a parallel with Gaslight in the baron’s flirting with the maid behind his fiancee’s back. He is ultimately punished for his immoral behaviour and the innocent Elizabeth finds refuge with Frankenstein’s friend and former tutor Paul Krempe, who is often regarded as the film’s moral compass. Despite his sanctimonious pontificating, however, his conduct seems to me as murky as the baron’s. He knows that Frankenstein’s experiments are unethical and repeatedly warns that their work ‘can only end in evil’, yet he keeps returning to help and evidently cannot resist his fascination with Frankenstein’s project. As his mind has not been corrupted to the extent that Victor’s has, Krempe arguably has more capacity to end the wickedness, and so his failure to act makes him even more culpable. His final silence not only conceals his part in the baron’s work, but also offers a neat way to remove Elizabeth’s fiance from the scene when it is obvious that he wanted her for himself all along. Just as Frankenstein got rid of his former lover when she began to get in the way, so too does Krempe callously dispose of his friend, using the executioner in much the same way that Frankenstein used the creature. (Although if the 1958 sequel The Revenge of Frankenstein is to be believed, the baron evades the guillotine and returns to his work.)

There is always the temptation, of course, to read more into these old films than their makers ever intended. Screenwriter Jimmy Sangster has been frank about the extent to which his work was driven by purely commercial concerns, admitting his bewilderment when Hammer fans ask him about Freudian symbolism, literary echoes and other esoteric nuances that they detect. That is not to say that such motifs are actually absent. Fisher may have wished to create a definite distance between The Curse of Frankenstein and Universal’s 1931 movie, but his film – consciously or unconsciously – contains clear homages to classic horror tradition, e.g. 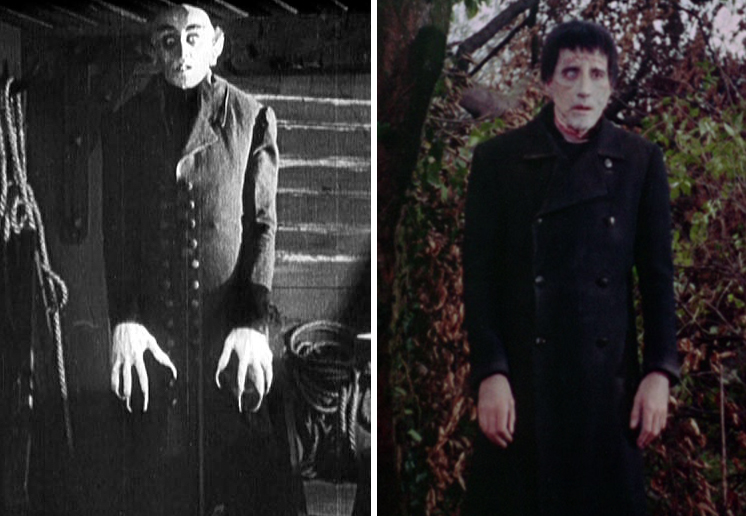 Watching the film on the big screen today has helped me appreciate the visual impact that The Curse of Frankenstein would have had on cinema audiences back in 1957. It seems a shame that this experience was shared by such a small audience – but for the record, our numbers had doubled by the time the lights dimmed.