As most readers of this blog will know, for over a decade I have been working on a biography of the émigré actor Adolf Wohlbrück /Anton Walbrook (1896-1967), but this weekend provided a wonderful opportunity to talk about this work as part of the Stardom and the Archive conference held at the University of Exeter, 8-9 February 2020. The conference was organised as part of the Reframing Vivien Leigh research project – I have written about the relationship between Walbrook and Leigh elsewhere on these pages – and its aims are summarised here:

Conventional critical discourse focuses overwhelmingly on the findings of archival research rather than the process with scholarship telling ‘a story about what you found, but not about how you found it.’ (Kaplan 1990: 103) The Stardom and the Archive symposium seeks to challenge this convention by centralising archival process and curatorial histories in researching stardom.

The conference has seen film scholars from all over the UK and beyond, including Australia and Turkey, come together to discuss diverse aspects of archival research, curatorial practice and fan collecting in relation to stardom. The range and quality of the papers so far has been fantastic, with an imaginative scope that includes gravesites and multi-media artefacts as well as the more traditional paper-based archives.

It was a great delight, as ever, to talk about Walbrook in the presence of such distinguished and appreciative company. My presentation was entitled Paper Trails, Masks and Mirrors: the archival quest for an elusive biographical subject and discussed the different phases of archival engagement involved in writing my biography, including the challenges of dealing with gaps in the archive, the complex relationship between Walbrook’s onscreen persona, his life as a private individual and the archival record of both his life and career. It was also an opportunity to discuss the creation of my own Walbrook collection – an archive of my research as much as a fan collection – and share some of its treasures.

My collection includes original letters, postcards, film posters, vinyl, glass slides, lobby cards, cinema magazines, theatre programmes from the 1920s to the 1960s, copies of documentation from state archives and theatre museums, photographs, film stills, presscutting files and 16mm film reels, as well as some of the original costumes worn by Walbrook in his films, and I raised the issue of how the agenda of the collector relates to that of the biographer or researcher.

This offered a chance to revist the exhibition Anton Walbrook: Star and Enigma, which I curated at the Bill Douglas Cinema Museum back in 2013. Anyone wishing to know more about this should watch the excellent short film made by Olivia Luder and available to watch here. As another aspect of archival engagement, I also discussed the brilliant artwork by Matt Horan (Matt Mclaren), which he created by painting scenes from Walbrook’s films, cutting out the images and then reassembling them in 3-D scenarios which were then photographed and turned into prints. My paper ended with a call for more collaborations like these, in which scholars, archivists, curators, artists and fans can learn from one another through sharing their different passions and fields of expertise.

Now it’s time to return for Day Two of the conference, which will close with the launch of the new Reframing Vivien Leigh exhibition! 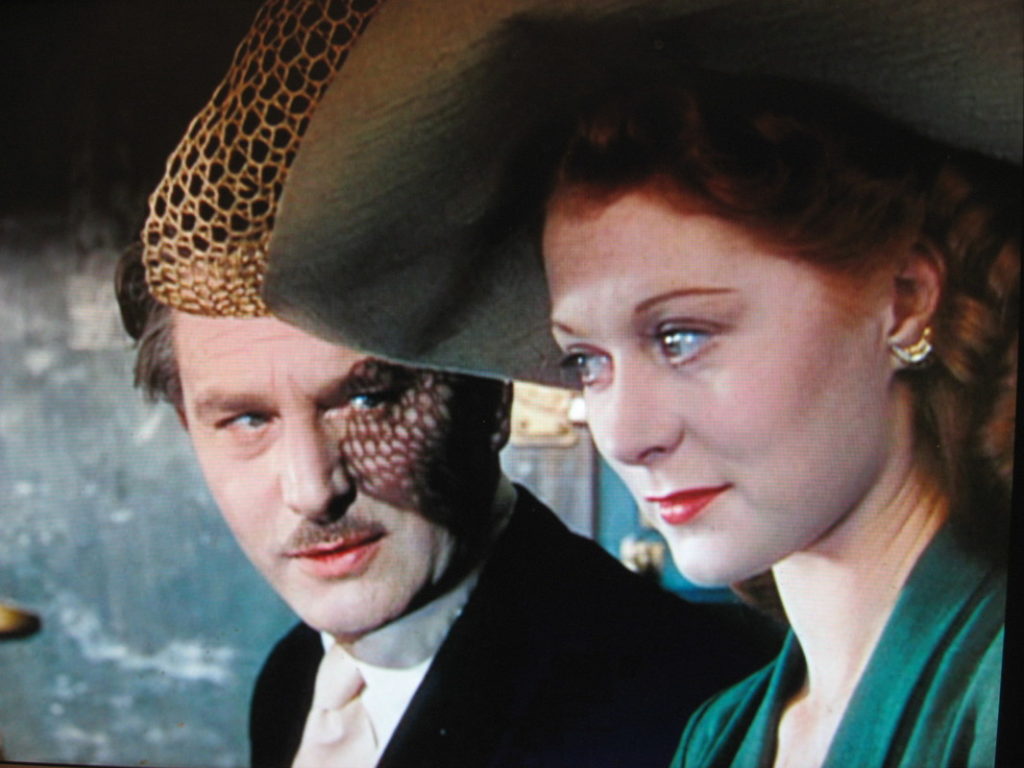 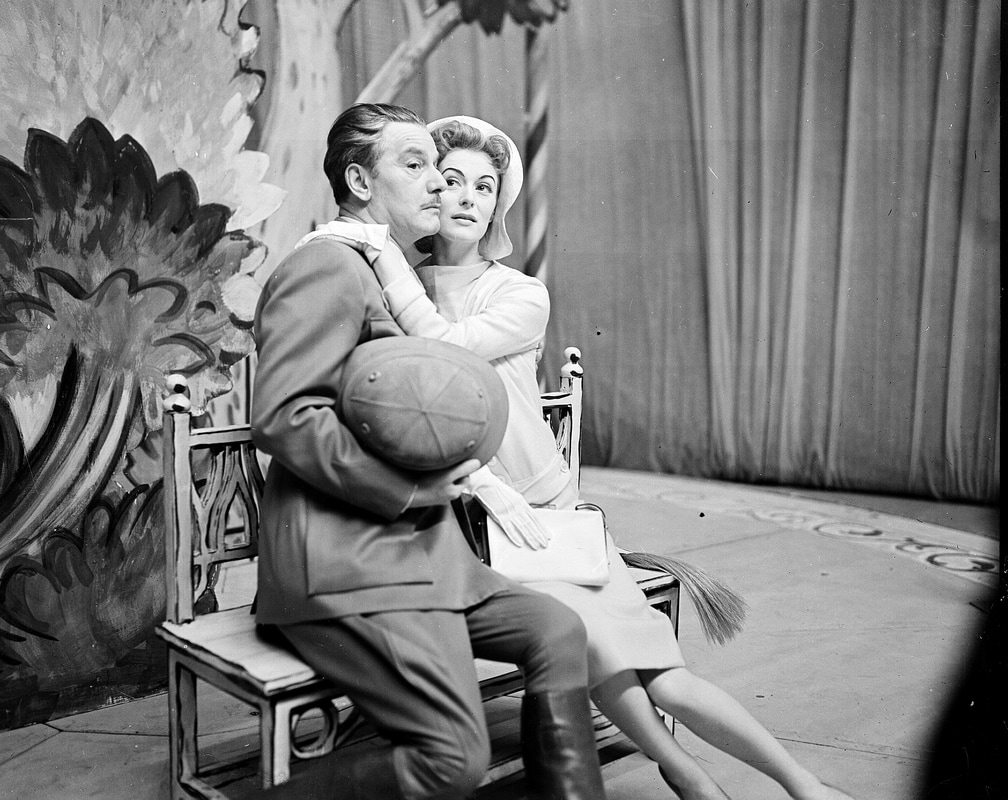 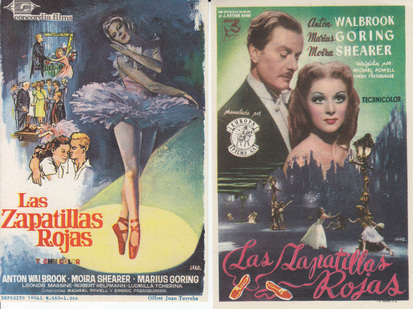 On this day, sixty five years ago, The Red Shoes received its world premiere at the Gaumont Haymarket and Marble Arch Pavilion. Both cinemas were part of the Gaumont chain, which was then owned by Rank – the decision to hold the premiere here, rather than at the prestigious Odeon in Leicester Square, was a mark of Arthur Rank’s lack of appreciation for the film. It nonetheless proved highly popular with British audiences – and international ones too, as these Spanish posters indicate.  To celebrate today’s anniversary, I’m posting a series of film stills – in black and white, alas, rather than glorious Technicolour. 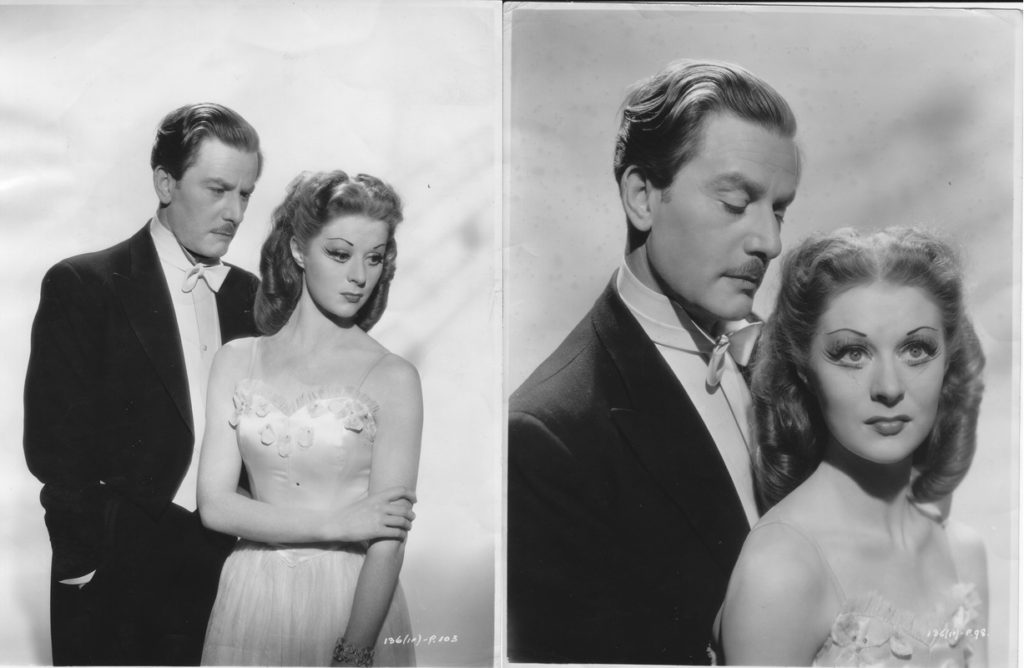 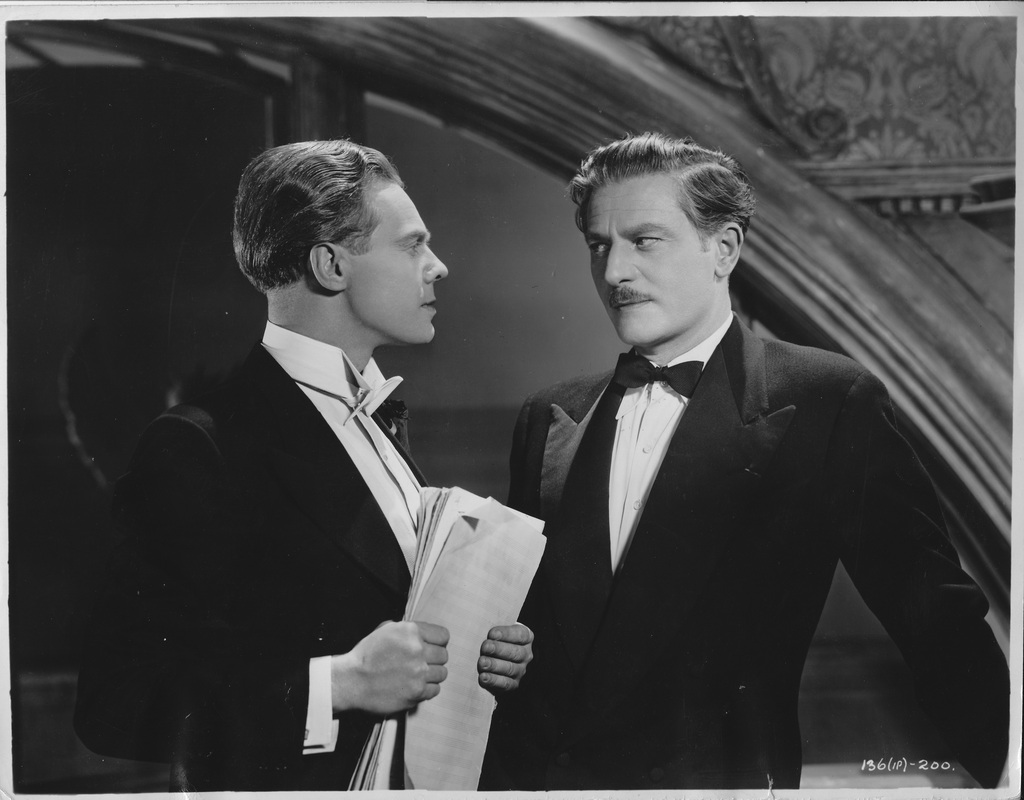 In this scene Lermontov’s jealousy impels him to criticise Julian’s score for La Belle Meuniere as ‘childish, vulgar and completely insignificant’ – a rare lapse in his professionalism, revealing the intensity of his feelings about Vicky’s career. For him, there can be no compromise. Julian, however, dismisses ballet as ‘a second rate means of expression,’ perhaps recognising that he lacks the same dedication to art that Lermontov and Vicky possess. 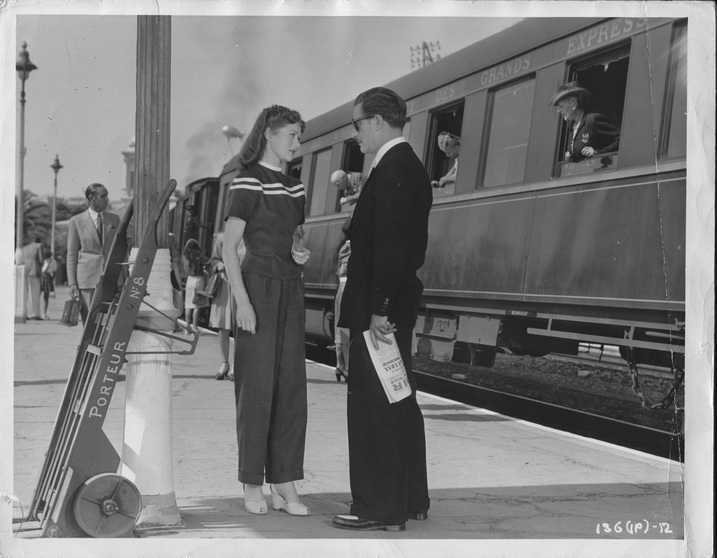 Vicky confronting Lermontov at the station in Monte Carlo in a vain effort to prevent him returning to Paris. He tells her he can make her ‘one of the greatest dancers the world has ever known.’ She knows this, but his cruelty towards her only serves to drive Vicky into Julian’s arms. 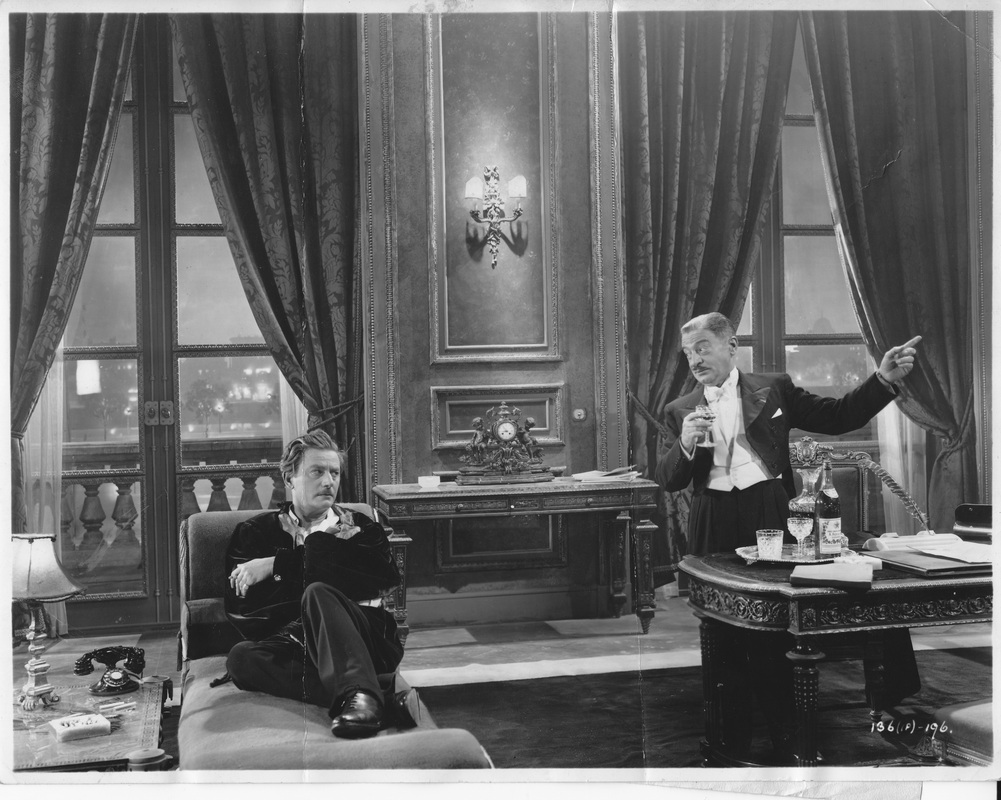 After learning of Vicky and Julian’s marriage, Lermontov consults his lawyer, Boisson, about taking out an injunction to prevent them from presenting an independent production of The Red Shoes. Boisson was played by Scottish actor Hay Petrie, who died just a few days after the premiere. He gave memorable performances in several Powell & Pressburger films, including The Spy in Black (1939), Contraband (1940),  The Thief of Baghdad (1940), One of Our Aircraft is Missing (1942) and A Canterbury Tale (1944.) After The Red Shoes he played the part of Walbrook’s servant in The Queen of Spades – his last role, before his untimely death in London on 30th July 1948. 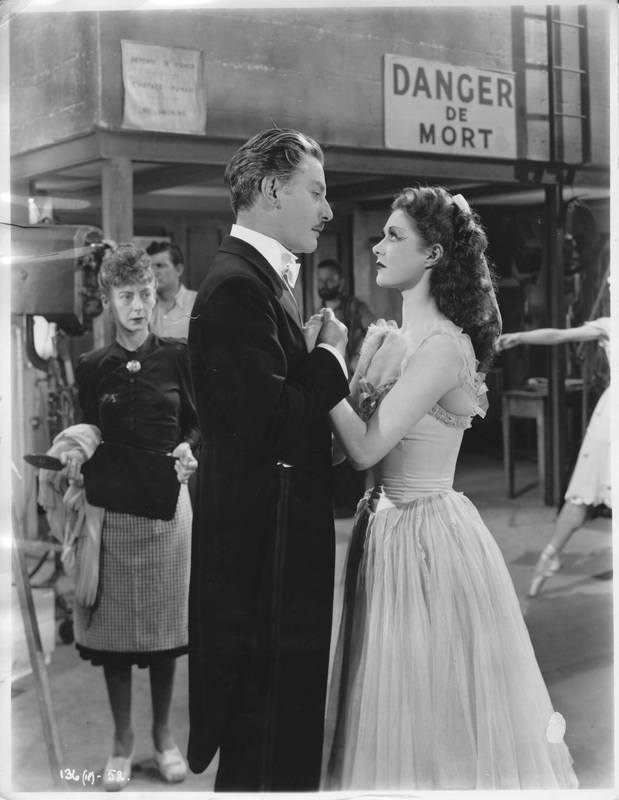 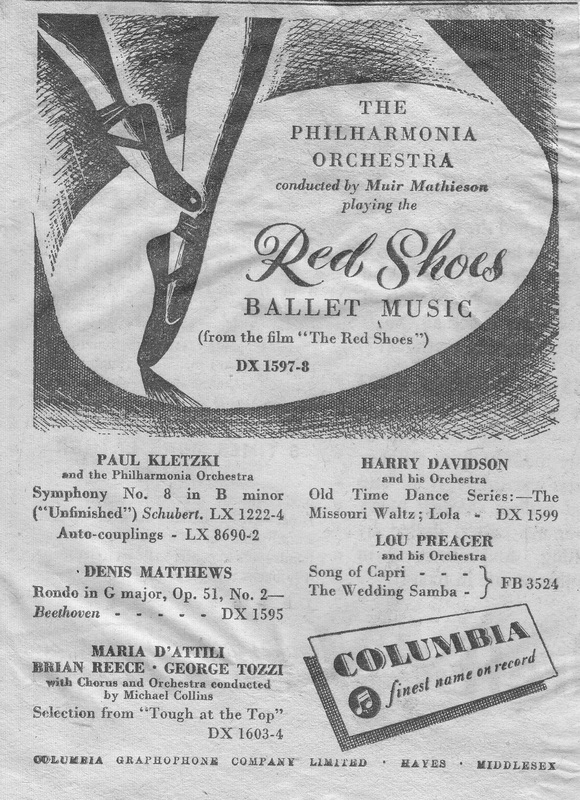 An advert for the Columbia record of the score from The Red Shoes. Mathieson was musical director for many of Walbrook’s British films, including Victoria the Great (1937), The Rat (1937), Sixty Glorious Years (1938), Gaslight (1940), Dangerous Moonlight (1941) and 49th Parallel (1941). In 1935 he  married an up-and-coming ballet dancer, Hermione Danborough, who was familiar with the world portrayed in The Red Shoes – she had worked with Robert Helpmann, who plays Ivan Boleslawsky, and in 1929 auditioned before ballet impresario Serge Diaghilev, founder of the Ballets Russes and an obvious inspiration for the Lermontov character.  After marrying the composer, Hermione retired from ballet, even though she had only just turned twenty: the very ‘fate’ from which Lermontov was determined to save Vicky.