Although I don’t normally collect postcards of old buildings, this one caught my eye in an antique shop late last year – and with a title like ‘Dr Phene’s House of Mystery, Chelsea’, I simply could not resist. 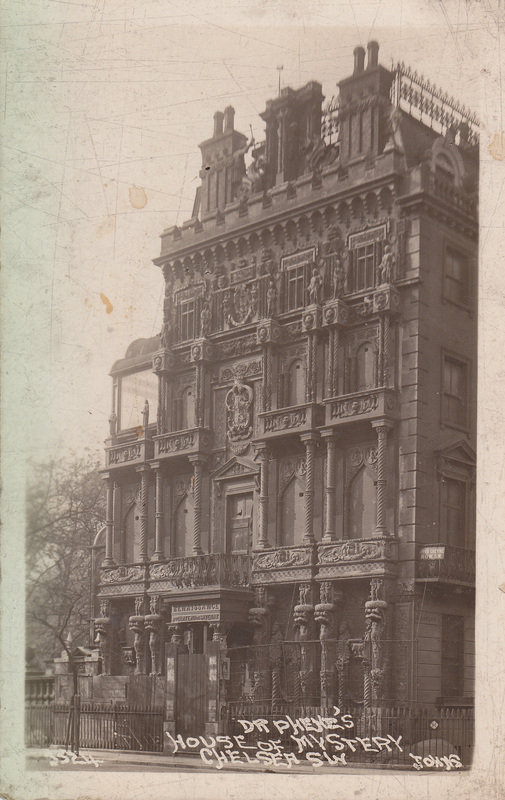 At first glance I (mis)read the caption as ‘Dr Phibes’, the vengeful protagonist played by Vincent Price in The Abominable Dr Phibes (Fuerst, 1971) but there’s a good case to be had for making an equally memorable film about the man who built the House of Mystery.

Dr John Samuel Phene FRIBA, FRGS (1824-1912) – architect, property developer, traveller, collector, scholar and antiquarian –  studied at Kings Lynn Grammar School, Durham University and Trinity College Cambridge before being articled to the firm of an architect by the name of Hardwic​k.
He seems to have inherited some property in Chelsea sometime before 1850, and in the following years he had constructed a number of buildings in what would become Oakley Street, Margaretta Street and Terrace (both named after his wife Margaretta Forysth, whom he married in 1850), Phene Terrace and Upper Cheyne Row. The Phene Arms was built in 1853 and is still a popular pub to this day. Phene had it built to provide a social hub for local tenants and he seems to have been a progressive thinker, planting trees on both sides of Oakley Street ‘to purify the air and help prevent epidemics.’

From his house at 32 Oakley Street he supervised the construction of ‘The House of Mystery’ on the corner of Upper Cheyne Row. Work seems to have begun in the early 1900s, and its curious appearance led locals to call it the ‘Gingerbread Castle.’  Phene, however, called it ‘The Chateau’ and a close-up of the lettering above the doorway reveals the words: ‘Renaissance du Chateau de Savenay’ – rebirth of the castle of Savenay – in honour of the area in France’s Loire valley that Phene claimed as his ancestral home. 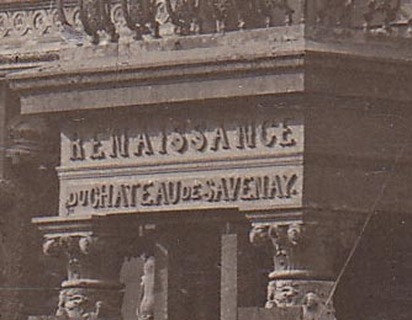 Despite the murkiness surrounding facts about his ancestry, it is clear that Dr Phene maintained an interest in the traditions of old France, for in 1885 he was one of the founders of the Huguenot Society of London. Despite the wealth of (often) apocryphal stories that circulate regarding this mysterious man, he was a serious scholar who published numerous research papers and gave both his services and artefacts to museums around the country. He was managing director of the Royal Polytechnic Institution before being succeeded by John Henry Pepper (of Pepper’s Ghost fame), and when Sir Peter Coats presented the town of Paisley with a Museum and Library in September 1870 it was Dr Phene who gave the inaugural address. Nonetheless there is often a tinge of eccentricity clinging to his publications, such as the pamphlet On Prehistoric Traditions and Customs in Sun and Serpent Worship (1875), an illustration from which is given below: 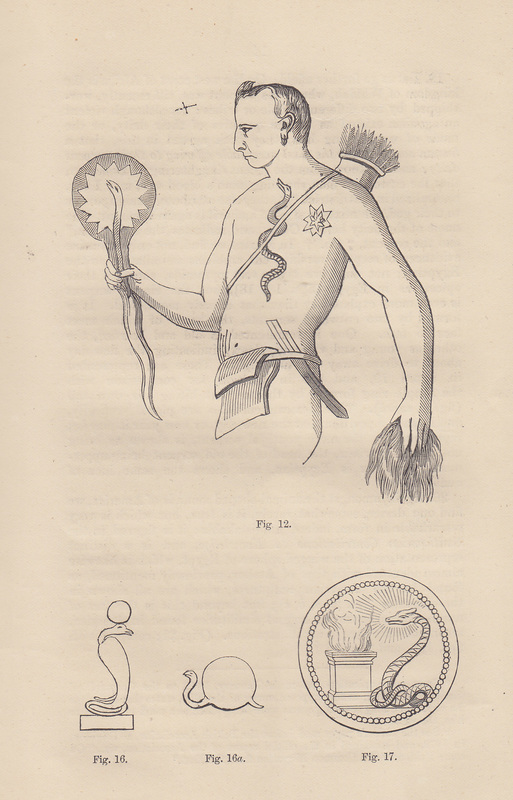 It’s a curious (albeit impressive) piece of work that examines the links between diverse traditions of sun and serpent worship around the world, from the Scottish Hebrides (where Phene spent several years and considerable expense looking for carved stones depicting serpents) to Egypt, America, Mexico, Greece and the west coast of Africa. The insights into ancient history might (or might not be) valuable, but the paper reveals some intriguing details about contemporary events: a footnote on p.4 informs us that ‘A curious illustration of fondness for serpents exists at Chelsea at the present time, which has led to alarm in the neighbourhood.’

A full list of his published work would be too long to detail here, but as a Life Member of the British Association for the Advancement of Science he presented papers at a number of their annual meetings, including ‘On some Evidences of a Common Migration from the East’ (Brighton, 1872) and ‘On the District of Mycene and its early Occupants.’  (Plymouth, 1877.) The British Library lists five publications:

On the Causes of Art: with an outline of the origin and progress of art from prehistoric to modern times … A discourse … Reprinted from ‘The British Architect.’       [19 pages]
Manchester ; London ; Glasgow, 1874

Victoria Queen of Albion : an idyll of the world’s advance in her life and reign.
London: Blades, East and Blades, 1897.          [165 pages]
This was written in verse, with twelve pages of plates, plus  an appendix carrying article on Roman London – presumably by Phene – which appeared in several newspapers and magazines in 1896

Exhibits by Dr. Phene in the Ecclesiastical & Educational Exhibition in the Imperial Institute, Kensington, October 7th to 14th 1899.  [8 pages]
London, 1899.

His long-standing interest in Scottish antiquities confirmed by a ‘Photograph of wooden idol from deep peat in Scotland’  taken by Phene in 1900 and registered with the Copyright Office. At the same time he also registered his  ‘Photograph of the Great Stone Ship Temple in Minorca. (Plate 1 of group of ten)’ and ‘Photograph of remains of pre-Roman and Old Roman London, sculptured masonry now in the Guildhall Museum, to illustrate Mr Roach Smith’s discovery of Sculptured Masonry in the foundations of the old Roman wall of London, testifying to a Pre-Roman stone built city of the Trinobantes (Plate 5 of group of five)’ – further evidence of his fascination with ancient stones.

Although sometimes referred to as a reclusive character, there seems to be plenty of evidence of social activities, including a photograph of him taken by Sir Benjamin Stone outside the House of Commons on 2 July 1907 in the company of Mark Twain and other gentlemen. His membership of numerous activities actually suggests a gregarious nature, and he was also an active member of the Royal Geographical Society and the Royal Society of Literature; following his death tribute was paid to him by Sir Edward William Brabrook (1839–1930) that offers further proof of his diverse interests:

‘I must first mention my dear old friend Dr. John Samuel Phene, who had reached his eighty-ninth year. He had been a member of the British Association since the year 1863 was elected a Fellow of the Society of Antiquaries in 1872, and Joined our Society in 1875. In the year 1892, when Lord Halsbury became President, Dr. Phene and I were added to the list of Vice-Presidents, of which list, as it then stood, I am now the last survivor. His deep interest in the Society was manifested by his contributing not fewer than eight papers to our Transactions, in which he brought great erudition and shrewd observation to bear upon a variety of subjects, viz.: ‘Linguistic Synonyms in the Pre-Roman Languages of Britain and of Italy’ (vol. xv), ‘King Arthur and St. George’ (vol. xvii), ‘Ethical and Symbolical Literature in Art’ (vol. xviii), ‘ δενδροϕορία or Tree Transporting’ (vol. xix), ‘Place Names in and around Rome, Latium, Etruria, Britain, etc., with Earthworks and Other Works of Art illustrating: such Names’ (vol. xx), ‘The Rise, Progress, and Decay of the Art of Painting in Greece’ (vol. xxi), and ‘The Influence of Chaucer on the Language and Literature of England’ (vol. xxii). There was thus, in recent times, hardly a year in which he did not make some communication to our Society: he was regular in attendance at our Councils up to the last year of his life.’
–   Report of the Royal Society of Literature, (1912) pp.12-13.

The stories about his reclusiveness may have some truth, for it seems that the doctor began building Cheyne House for his wife, and after her death he lost interest in the project and began to spend more time alone. He rarely left his Oakley Street residence after this, while the House of Mystery and Cheyne House in Upper Cheyne Row – now a storeroom for his collection of stones  – were both boarded up and abandoned. The four acre garden behind the house was strewn with large statues and other curios.

For those interested in reading more about Dr Phene, there’s an article on him in the July 2013 edition of Fortean Times (which I must confess I have not yet read), ​and also a nicely-illustrated blog post here. 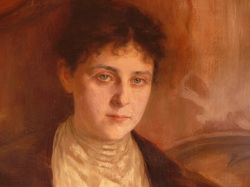 This week saw the publication of ‘Egyptology and Photography: Two Founding Fathers’ in Ancient Egypt magazine.  This project had its roots in a visit I paid to the house of a family friend many years ago, when I caught sight of a painting hanging on their wall. The portrait was by Reinhold Lepsius, one of the children of the Egyptologist Karl Richard Lepsius.
I was – and remain – absolutely captivated by this portrait and was keen to learn more about the artist and his family. I had heard of Karl Lepsius and knew a little about his pioneering work in the field of Egyptology, but as I began reading more about his personal life and achievements, my attention was caught by references to his attempts to use photography in his seminal expedition to Egypt in 1842.  Accounts of photography in the Middle East seemed to have overlooked this plan by Lepsius, largely because he returned without any photographs: the expedition’s findings were published in a monumental twelve volume work, Denkmaler aus Aegypten und Aethiopien (1849-58) which included nearly 900 plates, based on drawings and paintings undertaken on location. It is easy to see why Talbot wanted to support Lepsius, given his interest in Biblical archaeology, ancient languages and eastern antiquities.  Research for the article brought back memories of the passion I used to have for the same topics – how I had travelled to Durham to visit the Gulbenkian Museum, to Oxford to gaze upon the Weld-Blundell prism, to Dublin to see the magnificent Book of Kells…and I felt humbled in a way, that my entire experience had come solely from museums and libraries. The hardships and dangers endured by Lepsius and other contemporary travellers makes for hair-raising reading at times.