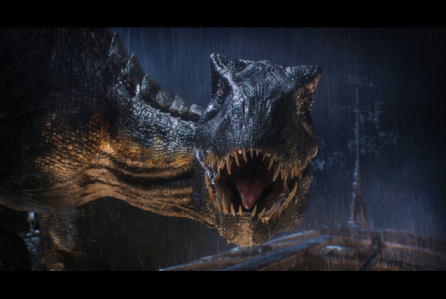 This weekend I went along to see Jurassic World: The Fallen Kingdom, the sequel to Jurassic World (Trevorrow, 2015) and the fifth in the franchise that began with Jurassic Park (Spielberg, 1993) and continued with The Lost World: Jurassic Park (1997) and Jurassic Park III (Johnston, 2001). Although the film has Derek Connolly and Jurassic World director Colin Trevorrow both returning as screenwriters, with Trevorrow and Steven Spielberg acting as executive producers, the introduction of Spanish film-maker J.A. Bayona as director gives this movie a welcome dash of Gothic horror that anyone who has seen his darkly atmospheric The Orphanage (2007) will appreciate. While in many ways the film retreads the familiar, audience-pleasing scenarios of the previous films, Bayona’s background brings some enjoyable Gothic frissons to the franchise and some elements that will please fans of classic British horror films of old. He directed a couple of episodes of Penny Dreadful too, including the frightening and surprisingly poignant ‘Séance’ episode, which surely should have earned Eva Green an Emmy.

There will be no spoilers here, or at least nothing that isn’t apparent from the trailers

The events of this film take place a few years after the first Jurassic World movie, as dino-trainer Owen Grady (Chris Pratt) and the former park manager Claire Dearing (Bryce Dallas Howard) return to Isla Nubar, a deserted ruin since the rampaging chaos of the first film. Claire’s career has changed tack somewhat, in that she is now leading a dinosaur-rights activist group, and the duo’s goal in returning to the island is to rescue the remaining dinosaurs from an imminent volcanic eruption and transfer them to safety. Their expedition is funded by the wealthy Benjamin Lockwood (James Cromwell), who – it is explained – was involved in the original dinosaur DNA experiments with John Hammond (the late Richard Attenborough.) His granddaughter Maisie Lockwood (engagingly-played by newcomer Isabella Sermon) spends most of her time bounding around the huge mansion learning about palaentology, but despite her youth, there are hints of mysterious connections between her past and that of the dinosaurs amongst whose skeletons she plays. 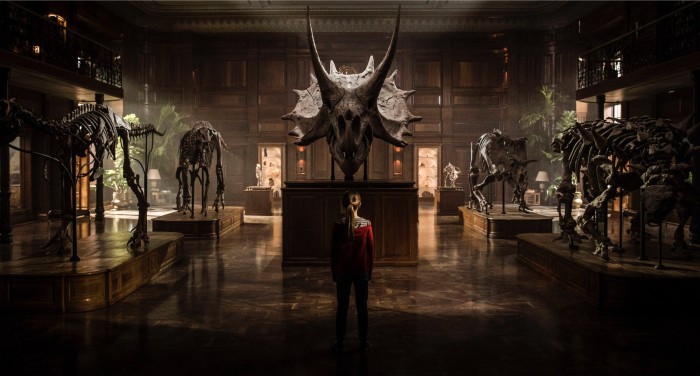 Supervising Lockwood’s rescue project is Eli Mills (Rafe Spall), an old friend of Claire’s. Now Spall will always be for me the frighteningly unstable Jay Wratten from the 2011 BBC series The Shadow Line and it’s no surprise to find him a villain here, following in the footsteps of Vic Hoskins (Vincent D’Onofrio) from the first film. He is just one of a great supporting cast of British actors, including Geraldine Chaplin and the ubiquitous but always-watchable Toby Jones.

While previous films have been pretty-much island-bound (part of the terror trap), Fallen Kingdom sees the dinosaurs moved off the island to their new home at the Lockwood Estate, a vast Gothic mansion with the inevitable basement in which unspeakable things go on. Much of Jurassic World was filmed in Pinewood Studios, but the exterior of Lockwood Manor is actually just a façade, constructed on Hawley Common, an army training ground near the Hampshire village of Minley. Bayona draws on his experience filming The Orphanage, as well as much older films and visual representations to explore the terror potential of dinosaurs loose in an old dark house.

The moral message of the film is not subtle – contrasting Blue Planet’s ethos of preserving natural environments and endangered species with the unregulated self-seeking excesses of capitalist greed, private militias and the mad science that has been condemned from Frankenstein through Westworld to the previous Jurassic movies. Genetic engineering has rarely been portrayed in a positive light on the big screen, and neither the Indominus Rex of the last movie nor the Indoraptor of this one do anything to change the impressions made by watching Deep Blue Sea (Harlin, 1999) Black Sheep (King, 2006) Splice (2009) or any other Promethean fable. While there are a number of deliberate and rather obvious references to scenes from earlier films in the Jurassic franchise, viewers might also enjoy spotting gentle nods towards much older dinosaur films such as One Million Years BC (1966) and Valley of Gwangi (1969), about which I’ve written previously [see here] While watching, I was also reminded of the comic-strip story ‘Flesh’ which appeared in 2000 AD during the late 1970s.

Despite healthy box office returns the film has received mixed reviews from critics, some of whom appear oddly confused about the aims of the creators of the Jurassic franchise; while one party carps about Fallen Kingdom sticking too closely to the storyline of earlier movies, another group grouches about the folly of taking the franchise in a different direction. I think it’s fair to say that the film aims at – and achieves – a balance between nostalgia and novelty. Feverishly debating how silly it may or may not be is as pointless as the endless controversy about the correct walking speed of zombies. As some of the pics above illustrate, the film has some superb visual effects with Bayona knowing how to play with panoramic sweeps as well as atmospheric shadows and reflections. Audiences can feast their eyes while the dinosaurs feast on the baddies. Isn’t that what the franchise is all about?

On 7 May the BBC finally released a DVD of The Mad Death, some 25 years after the miniseries was originally broadcast in the summer of 1983. The programme imagined what might happen if rabies was introduced into Scotland, and over the course of three episodes follows the spread of the disease, its effect on victims, and the authorities’ attempts to control the outbreak. Filmed on location around central Scotland – including a memorable chase sequence in which a landrover pursues a rabid dog through the old Plaza shopping centre at East Kilbride – and containing some horrific scenes of rabies symptoms, including nightmarish hallucinations – the programme attracted a great deal of attention at the time, especially as the threat of rabies reaching the UK was a real fear then, and the subject of widespread media campaigns. 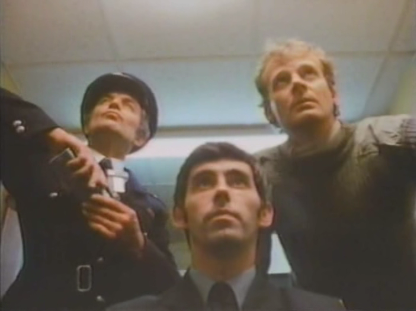 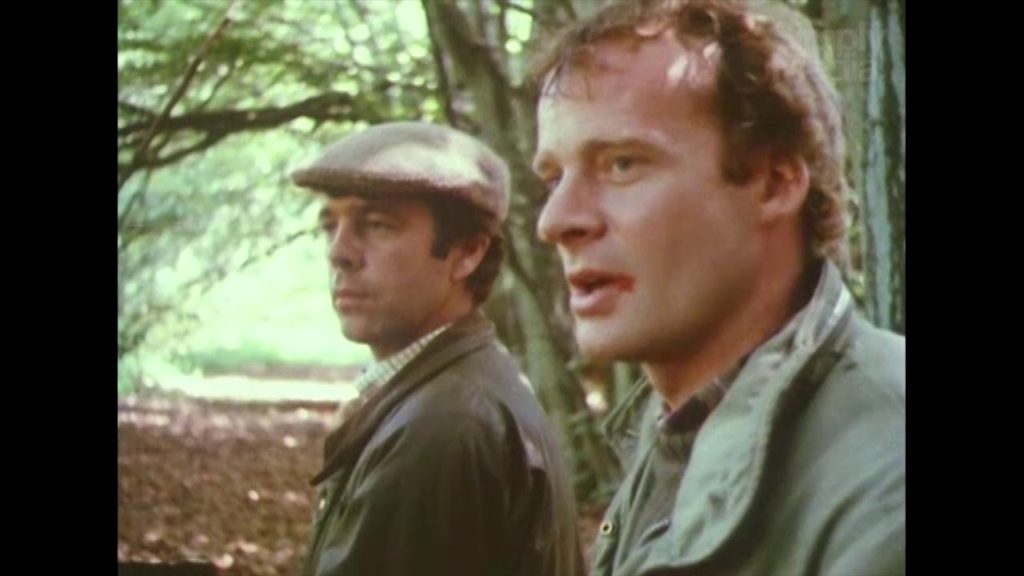 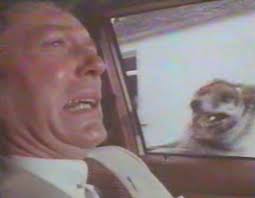 In retrospect, one wonders if we worried too much, and over the years my memories of watching the original broadcast have been tempered by further reflection about the other fears and anxieties that perhaps lay beneath all the lurid imagery and ‘protect our borders’ propaganda. 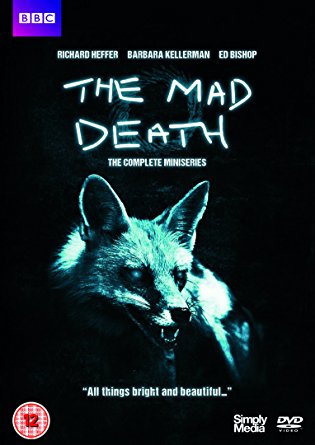 The BBC’s timing of their DVD release was rather serendipitous as it coincided with the publication of my illustrated article, ‘”Mad Dogs and Englishmen”: Hydrophobia, Europhobia and National Identity in “The Mad Death” (BBC Scotland, 1983)’ in the online periodical, The International Journal of Scottish Theatre and Screen. This was written for a special issue on ‘TV in Scotland: Past, Present and Future’, and some idea of the contents can be gleaned from the abstract:

BBC Scotland’s three-part series The Mad Death (1983) presented a fictional account of a rabies outbreak on Scottish soil. Although the story was based on a lurid unpublished novel and made use of classic horror tropes, including animal attacks, imprisonment in a baronial manor and terrifying hallucinations, it also reflected the sober tone of public information films and contemporary rabies safety campaigns. Filmed in Scotland and making effective use of Highland locations and actors such as Jimmy Logan, the ‘Scottishness’ of the production was nonetheless undermined by the vague presentation of the physical landscape, uncertainty over the parameters of the Scottish and English authorities, and an uneven depiction of social classes and dialects. A more detailed study of this content reveals the cultural anxieties that underpinned the narrative and characterisation, which remain acutely relevant as the 35thanniversary of the original broadcast approaches. Drawing on original production materials and personal discussions with screenwriter Sean Hignett, this article places The Mad Death in its social, cultural and political context, exploring how the series engaged with questions of national heritage and social identity while at the same time repackaging familiar tropes from the traditions of the horror genre. Particular attention is applied to the ways in which the spread of rabies is used to reflect anxieties about the dangers of European integration, employing language and attitudes that are all too familiar from the ongoing ‘Brexit’ debate in Britain. Through a close analysis of these issues it is possible to provide detailed insights into the production of The Mad Death, the adaptation process and the workings of the Scottish television industry during a time of social and political upheaval. The essay aims at providing a case study from which lessons can be learned that could help guide policy for future Scottish programming.

and also from a little ‘word cloud’ image that I generated: 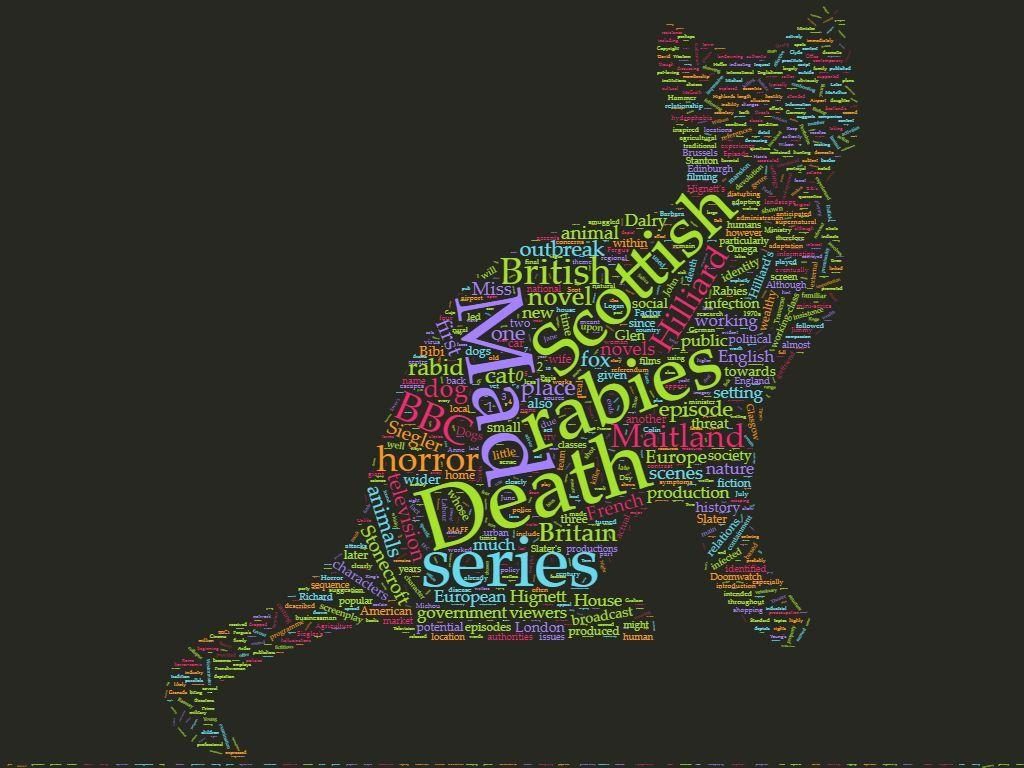 For those who wish to read my article, it can be accessed (free-of-charge) here 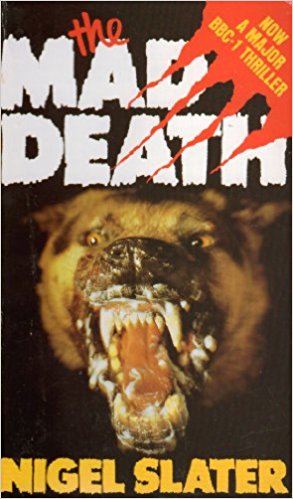