Here we are, Halloween again, so I thought I might post something appropriate. There’s a lot of material to choose from, especially with the British Library running its Terror and Wonder: the Gothic Imagination exhibition at the mo, paralleled by BBC’s Gothic season showing programmes such as the three-part documentary The Art of Gothic. We even had my favourite The Curse of Frankenstein on BBC2 a few days ago. But rather than retread familiar themes, I thought I’d post a few pictures from a book I picked up last year, especially as – after my visit to Dorset earlier this month – my interest in Wessex lore has been sharpened. 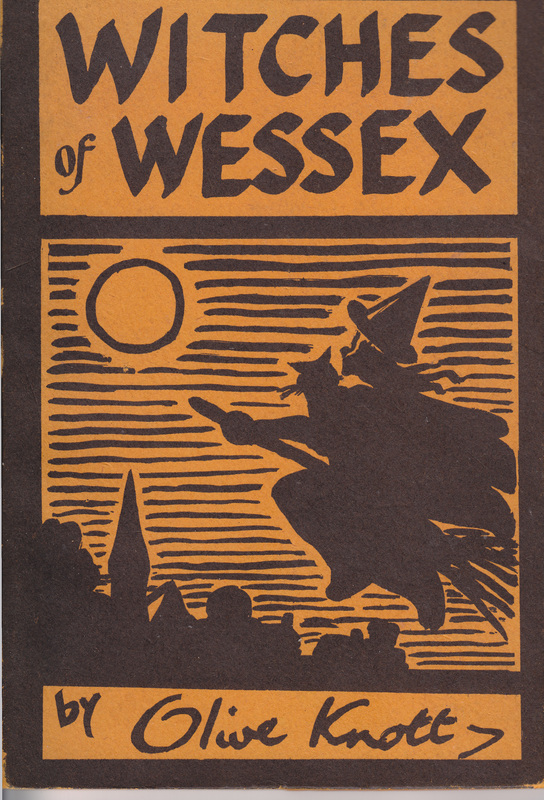 Olive Knott’s little book was self-published in 1960 while she was living at Sturminster Newton, a small town on the River Stour in Blackmore Vale. The poet, schoolmaster and parson William Barnes (1801-86) was born just outside the town, and a line from his poem A Witch is quoted on the flyleaf:
‘They us’d to keep her out o’house, ’tis true,
A-nailen up at door a hoss’s shoe.’
A picture of two linked horse-shoes is the first of about ten woodcuts by Kenneth L.G. Hart, who also illustrated her Old Dorset, Down Dorset Way, Tales of Dorset and More About Dorset. 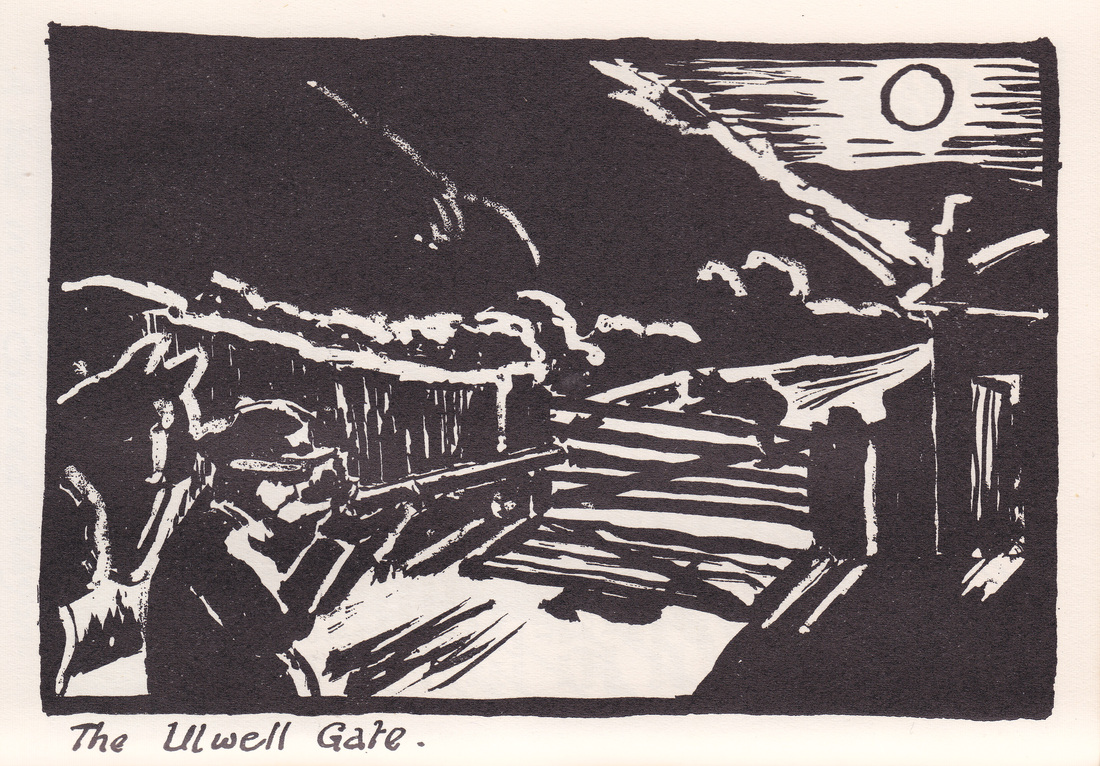 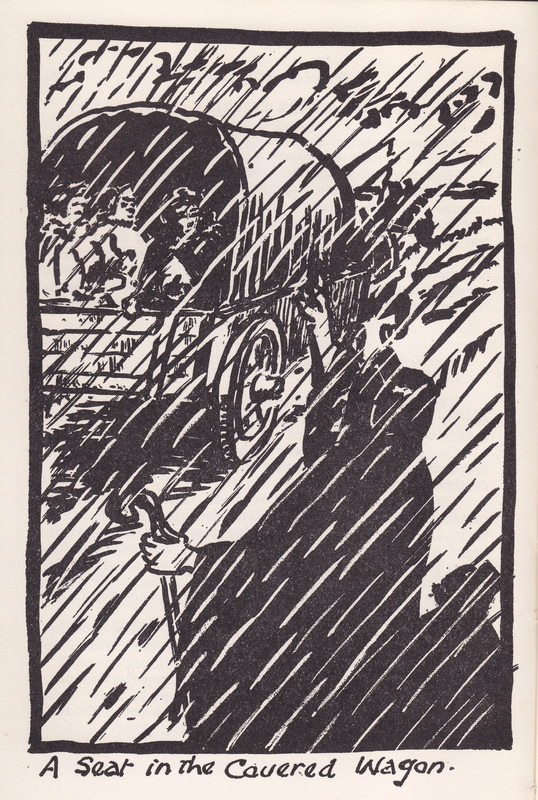 Thomas Hardy lived in the same village as Olive Knott for about eighteen months (July 1876 to March 1878) and it was here that he wrote The Return of the Native (1878), which of all his novels is the one most concerned with local folk magic. One character, Susan Nunsuch, creates a poppet doll of Eustacia Vye, who is using her own unearthly powers to attract a local innkeeper whom she seeks to marry, but who is already engaged to another woman. Eustacia is described as having ‘pagan eyes, full of nocturnal mysteries’ and she is regarded as a witch by many of the locals. Both Susan and Eustacia are shown carrying out magic rituals, and it is interesting that ten years later, in his short story The Withered Arm (1888), the use of such rituals is again part of the conflict between two women, Rhoda and Gertrude, who are competing for the same man.

Hardy was on record as stating that these incidents were based on real events, and the wise man whom the two women approach for help – Conjuror Trendle – was a thinly disguised version of a local character still living at the time. Hardy’s friend Hermann Lea wrote about this, and many other supernatural incidents known to him, in his contribution ‘Some Dorset Superstitions’ to Memorials of Old Dorset (1907.)

Some of these traditions persisted for another thirty years at least. In The Return of the Native Susan also pricks Eustacia with a stocking needle in church, in the hope that drawing blood unseen would free her children from the spell that she believed Eustacia had placed on them. According to Olive Knott, a man in Charlton Marshall was cut on the hand in 1939 for the same reason, by someone who blamed him for ill-fortune.

Those wishing to read more about Olive Knott should consult this post by Alan Burridge.
Most of the last fortnight has been spent reading and writing on architectural photography in relation to Victorian church restoration, linking up with the other religious and aesthetic themes that are central to my thesis. After poring over old volumes of The Ecclesiologist and original letters from SPAB members, well-known classics such as Charles Eastlake’s History of the Gothic Revival and spirited protestations by William Morris, plus the usual mounds of secondary works and periodical literature, I derived a keen pleasure from these fifty year old drawings by Rodney Hubbuck. 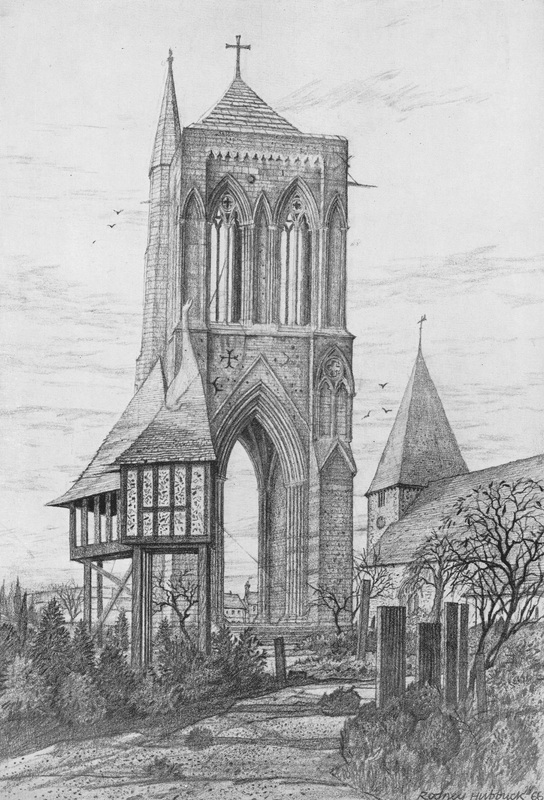 A Tower, after Sir Gilbert Scott’s Tower at All Soul’s, Leeds
Born in Hindhead, Surrey in 1940, Hubbuck developed his interest in architectural drawing while at school at Frensham Heights, a forward-thinking school in Farnham. After further training at Portsmouth School of Art (1957-61), he spent a few months as a prospective artist in the office of architects John Seely & Paul Edward Paget, before returning for further studies at the Bath Academy of Art at Corsham and then Brighton College of Art. He then took up the post of assistant art master at Bradford Grammar School. 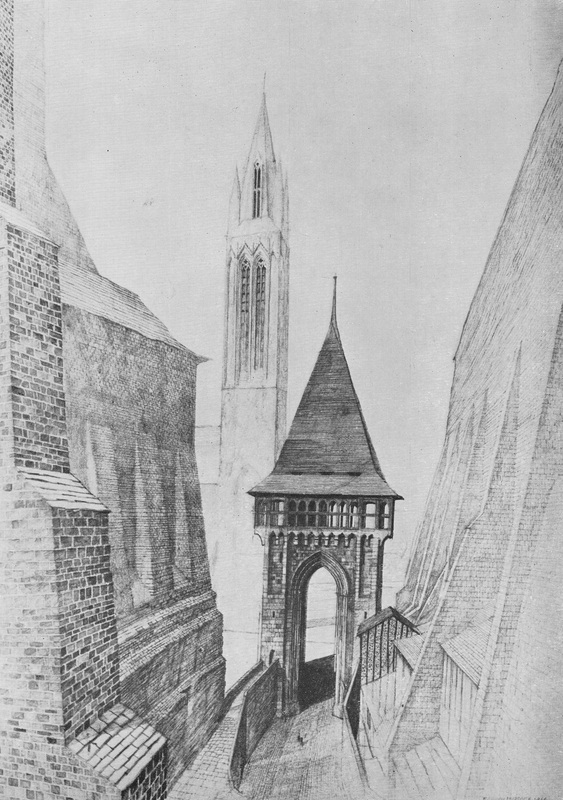 Through a Needle’s Eye: an imagined approach to the London, Brighton and South Coast Religion
His deep understanding of Victorian church architecture – both the structure and the history – is evident from these drawings; like most of his work, they appear to have been executed in soft lead pencil. The curious juxtapositions have an element of fantasy about them, while – to my mind – also offering a wry commentary upon the anachronistic work carried out by well-meaning Victorian restorers. 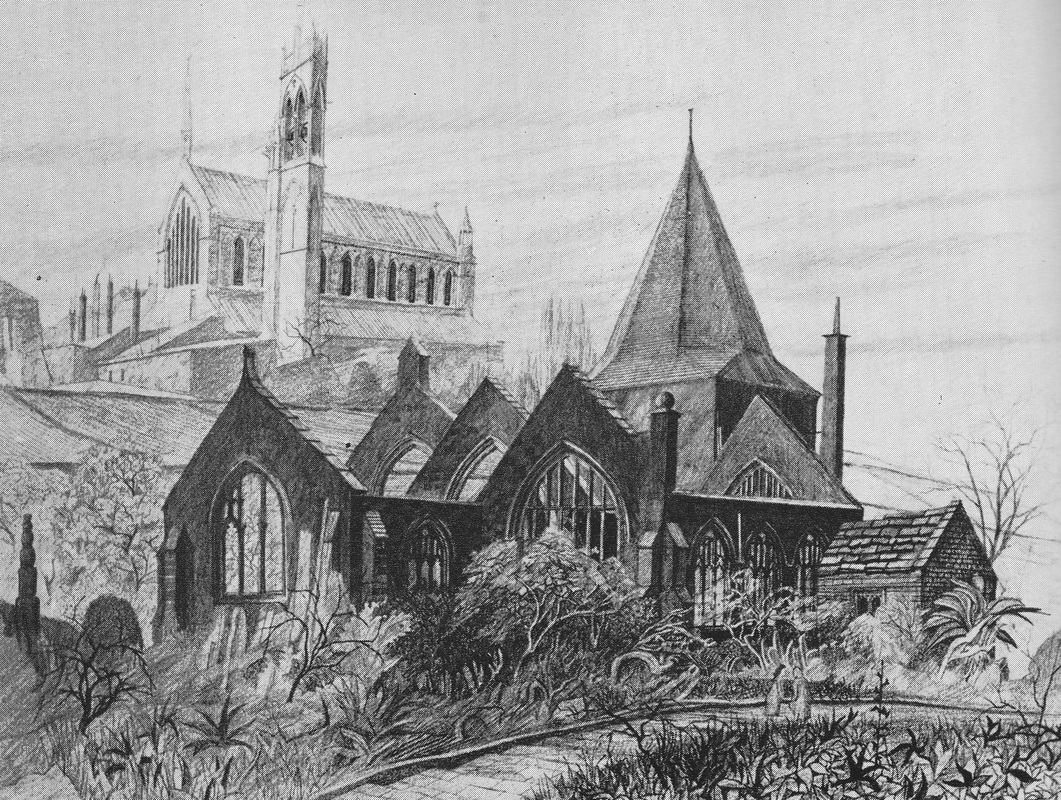 The Old Church Supplanted
Hubbuck subsequently left Bradford to become a full-time artist, although he also occasionally wrote on architectural subjects: he co-authored with Nikolaus Pevsner the volume on Hampshire: Winchester and The North (1967) for the Buildings in England series, and published a pamphlet on Portsea Island Churches (1969, revised in 1976.) He now lives in Dorchester, where I’m going in a few days time. Sadly, I realised today that I’ve just missed an exhibition of his work that was being shown earlier this summer. In his masterly use of the pencil and profound grasp of architectural detail, his skill matches that of one of my other featured artists, Joseph Pike – but how different are their styles! 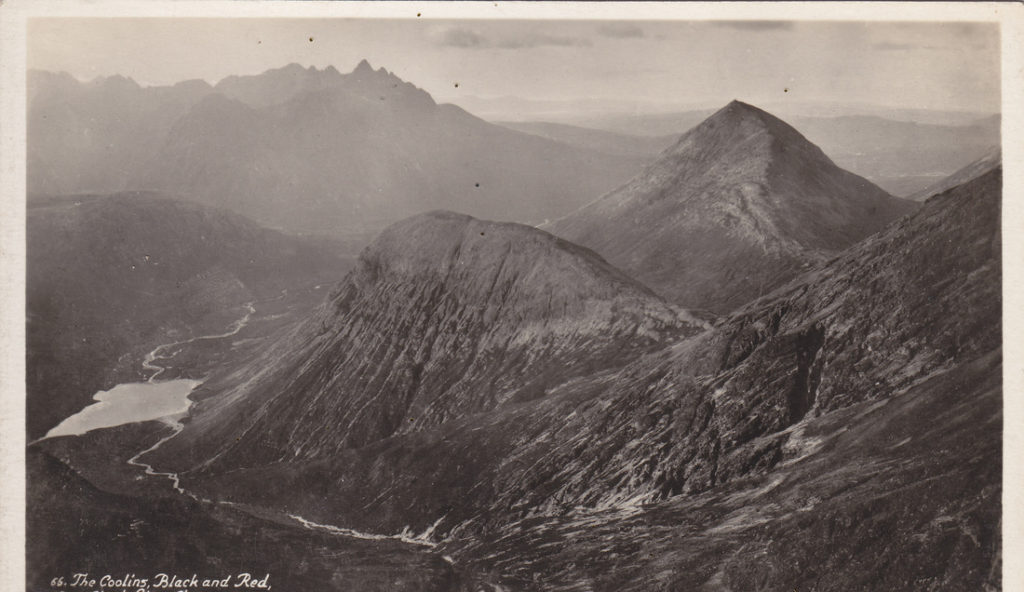 Much as I have come to love Devon, there are times when even its wildest places seem densely overpopulated, its most expansive moors hemmed in on every side, and its highest hills little more than dimples on the horizon. 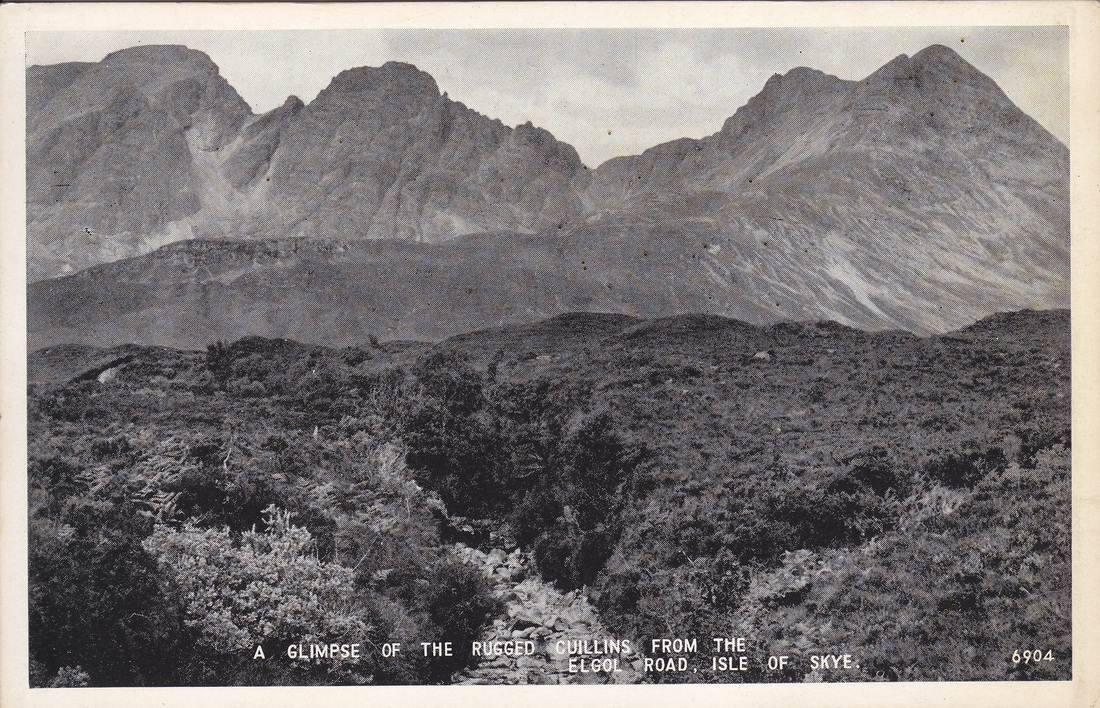 At such times I indulge myself in digging out old postcards such as these from my collection, gazing over scenes that were once familiar to my feet as well as my my memory. 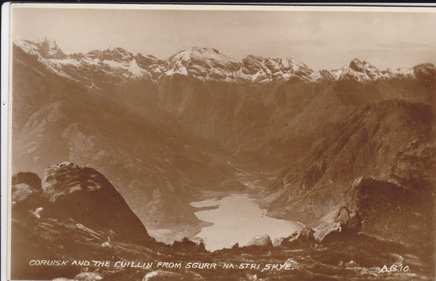 If memory serves me well, the Talisker distillery, which featured in a recent post, lies beyond the horizon here. A body would deserve a dram after such a climb. For the time being, however, I’ll just have to content myself with a nostalgic wander through the postcards. Wish you were here? I wish I was there…