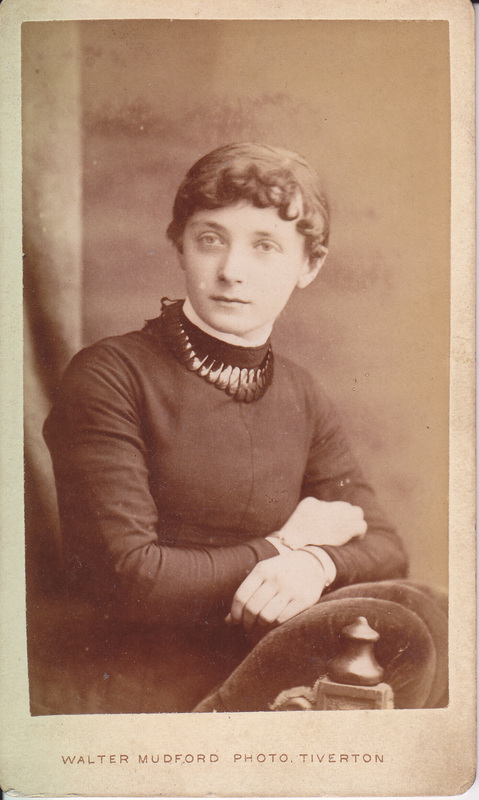 A familiarity with different periods of Victorian costume is a skill that collectors of CDVs rapidly acquire. In the absence of dates or other identifying data, dress and hair styles provide valuable clues about when a photograph was taken, and may even help indicate the location. Anyone who takes a serious interest in these images soon learns to recognise features such as bustles and bodices, chignons and chemisettes, mutton-chop sleeves and polonaise skirts.

Occasionally one comes across a portrait, however, in which the sitter appears to inhabit a different time period from the one in which they lived. An apparent anachronism of dress, a startlingly novel hairstyle, or perhaps an informal pose or facial expression that feels more akin to a modern ‘selfie’ – any little feature like this can jolt the reader into looking more carefully at the carte and questioning what they know.

This was the case for me with this particular portrait, which was taken in a studio about nine miles from where I am writing this. At first glance, the young woman’s hairstyle and neckline looked remarkably modern: it is possible that her hair is long at the back – bobbed hair would have been extremely rare before the 1920s – but I remain struck by the unusual cut, the metal necklet and plain, smooth outfit.

What clues can be used to date the portrait? A little digging through the Tiverton census records was enough to provide a rough outline of the photographer’s life.

Walter Mudford (1851-1936) was one of six children belonging to William and Mary Mudford, who lived at 50 Fore Street, Tiverton. William is described in the 1861 census as a basket-maker and dealer in china, glass and fishing tackle; his eldest son William was also selling fishing tackle in 1861, but ten years later Walter – now aged 19 – gave his occupation as basket maker.

Walter Henry Mudford first appears as a photographer in the 1878 Harrod’s Directory for Devon. The 1881 census reveals that, although still living with his parents, he employed two other men in his photographic business.  Thirty years later it had become very much a family business. Working at the photographic studio at 10 Fore Street in 1911 were Walter, now 59, assisted by his wife Emily, 23-year old daughter Kathleen and 19-year old niece Gladys.

Employment in a photographic studio provided reasonable opportunities for women in the 19th century, and not always at a junior level: the wife of Disdéri, the great populariser of the carte-de-visite, was one of the earliest women to run her own professional studio, while some of the finest art photographers in both Britain and America were women – one thinks of names such as Lady Clementina Hawarden, Julia Margaret Cameron, Gertrude Käsebier and Anne Brigman. Theirs was a very different line of work from that undertaken by Kathleen and Gladys Mudford, who would have obliged to work long hours for a wage of only a few pounds a week. I suspect the young lady who sat for this portrait led a rather different life.

It was easier for men to progress up the career ladder, and in the same census (1911) we find Walter’s 19-year old son Harry giving his occupation as a factory dyer. When his father died on 2 August 1936, he was a chemist. The family business is long gone now, and the site of the Mudford studio is now occupied by a branch of Oxfam.