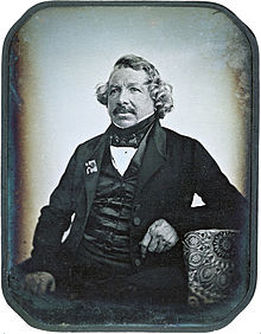 It was 175 years ago today that the invention of Louis Jacques Mandé Daguerre (left) was officially made public. On 7 January 1839 François Arago told an astonished meeting of the Académie des Sciences in Paris about Daguerre’s success with his new technique for capturing and fixing an image. Details were not revealed in his speech, but members of the Académie were shown examples of the images, which came to bear the name of their inventor.

Daguerreotypes were made by holding a thin plate of silver-coated copper over iodine fumes which coated the surface in light-sensitive silver iodide. When exposed to light in the camera, this produced a latent image which could then be developed with heated mercury. The image was then fixed using common salt – a process later improved by using ‘hypo’ or hyposulphite of soda. 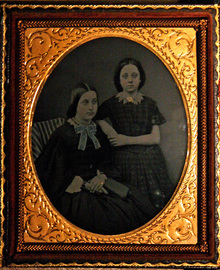 The highly polished silver surface of the plate gives daguerreotypes their distinctive mirror-like reflective appearance, but it also makes them quite tricky to photograph – my attempt to photograph one of my own daguerreotypes (right) does not do justice to this lovely image of two young girls.The great beauty of Daguerre’s process is that the resulting images are remarkably detailed, clear and precise. This gave them the edge over the rival process invented by William Henry Fox Talbot (below) who was caught off guard by Arago’s announcement. 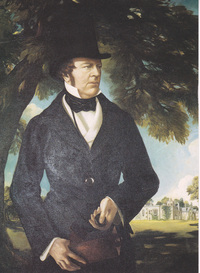 Henry Talbot had been working on his own ‘photogenic drawing’ process for several years but, unaware of Daguerre’s research on the other side of the Channel, he felt no sense of urgency about publishing his findings. When news of Arago’s announcement reached England he bitterly regretted his tardiness, and – until he knew more about Daguerre’s process – Talbot feared that his efforts might all have been for nothing. He hastily wrote up his notes and presented a paper to the Royal Society at the end of the month. It still took a while to catch up with the Frenchman, and Talbot’s early images were no competition for the jewel-like precision of the daguerreotype. By 1841, however, he had made significant advances and his ‘calotype’ process possessed aesthetic qualities that the daguerreotype lacked. 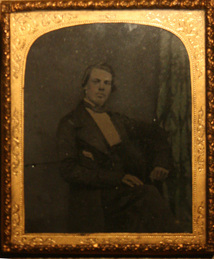 Although this image looks similar to the daguerreotype above, it is in fact an ambrotype, made using the wet collodion process. A closer look will reveal that the image is on a glass plate that has a horizontal crack. Ambrotypes have a darker, duller appearance than daguerreotypes.I bought this in an antique shop and they are relatively inexpensive.

The wet collodion process was invented in 1851 and involved pouring a solution of collodion over a glass plate which was then immersed in silver nitrate solution and exposed while still wet: hence the name. The resulting negative image could be used to produce any number of positive prints; these were usually made on albumen paper.The ambrotype is a slight variation on this process: instead of using the glass plate as a negative, the back of the plate was painted with black varnish and it was then placed inside a sealed case similar to those used to protect daguerreotypes. When viewed against the dark background, the negative image actually looks like a positive one – an illusion often further enhanced through the use of hand tinting.Archer published details of his process in The Chemist magazine in March 1851. Daguerre died four months later, on 10 July 1851. Despite its reliance on dangerous chemicals, the wet collodion process soon supplanted the daguerreotype. 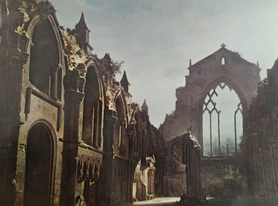 Daguerre may have given his name to the process, but there were others who contributed to the invention of the daguerreotype. He had been seeking ways to capture images since the mid-1820s, while earning his living with hugely popular diorama shows in Paris and London. These comprised two or more large paintings that were displayed in darkened auditoriums with an ingenious arrangement of theatrical effects such as moving stages and alternating light effects. This oil painting of Holyrood Chapel (left) was painted by Daguerre in 1824 and was used as the basis for a diorama show in Paris, London and Liverpool. In 1829 he went into partnership with Nicéphore Niépce, whose View from the Window at Le Gras (1826) is the world’s oldest surviving photograph. Niépce died in 1833 and his contribution to Daguerre’s achievements was ignored until relatively recently.