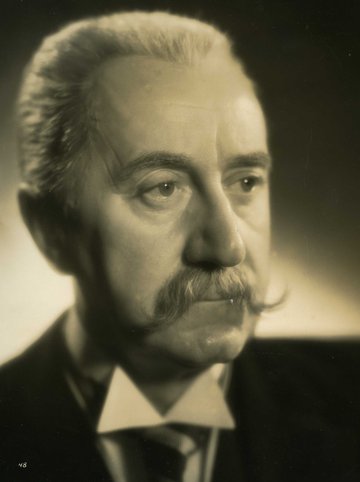 Max Gülstorff (1882 – 1947)
Those who have seen Ich war Jack Mortimer (Froelich, 1935) may remember the scenes in which Fred Sponer (AW) meets the parents of his girlfriend Marie Polikow. played by Maria Lojda and Max Gülstorff (below.) 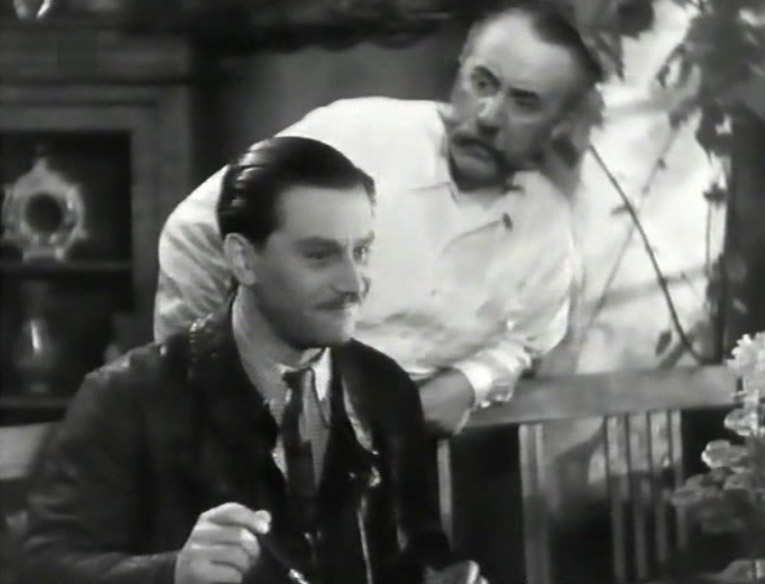 Recently the Bill Douglas Cinema Museum – where I have worked as a volunteer for many years – acquired a large album of photographs and press cuttings compiled by Max Gülstorff that had been passed down through his family. It contains 64 large pages of pictures, in between which are loosely pressed a mass of newspaper cuttings, theatre programmes, photographs and other ephemera. I have written a blog post on the album for the museum’s website which you can read here, but I wanted to give a short overview of Gülstorff’s life and the points of intersection with AW’s career.

Max Walter Gülstorff was born on 23 March 1882 in Tilsit, East Prussia, (now the Russian town of Sovetsk) and began working in provincial theatres in his late teens. He moved to Berlin about 1911 and four years later joined Max Reinhardt’s ensemble at the Deutsches Theater. This was around the same time that young Adolf Wohlbrück enrolled at Reinhardt’s drama school which was attached to the theatre, so as a student AW would have had many opportunities to watch Gülstorff perform on stage. There is a photograph in the album of Gülstorff with three other famous members of the company: Emil Jannings, Paul Hartmann and Werner Krauss, all of whom AW worked with either on stage or screen.

He began appearing in silent film in 1916, and one of his earliest roles was playing Uncle Eli alongside Conrad Veidt in Jettchen Geberts Geschichte (Oswald, 1918.) He went on to appear in over forty silent films during the 1920s, using his skill as a character actor to bring life to minor roles such as schoolmasters, professors, doctors and pompous officials, while continuing to appear regularly on stage (below.) 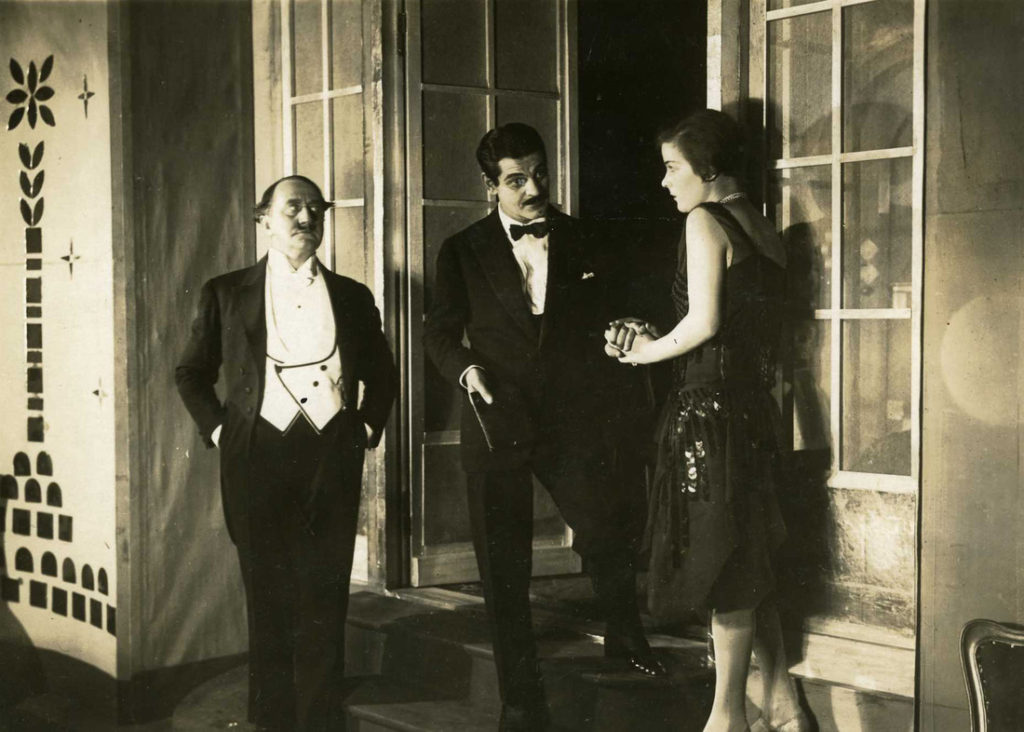 Gülstorff on stage in 1926 with AW’s regular co-star Renate Müller, in Georg Kaiser’s play ‘Zweimal Oliver.’
In November 1930 Gülstorff, AW and Gustaf Gründgens appeared on stage together in Ferdinand Bruckner’s Elisabeth von England. Those wishing to read more about this production can go to my blog post here. 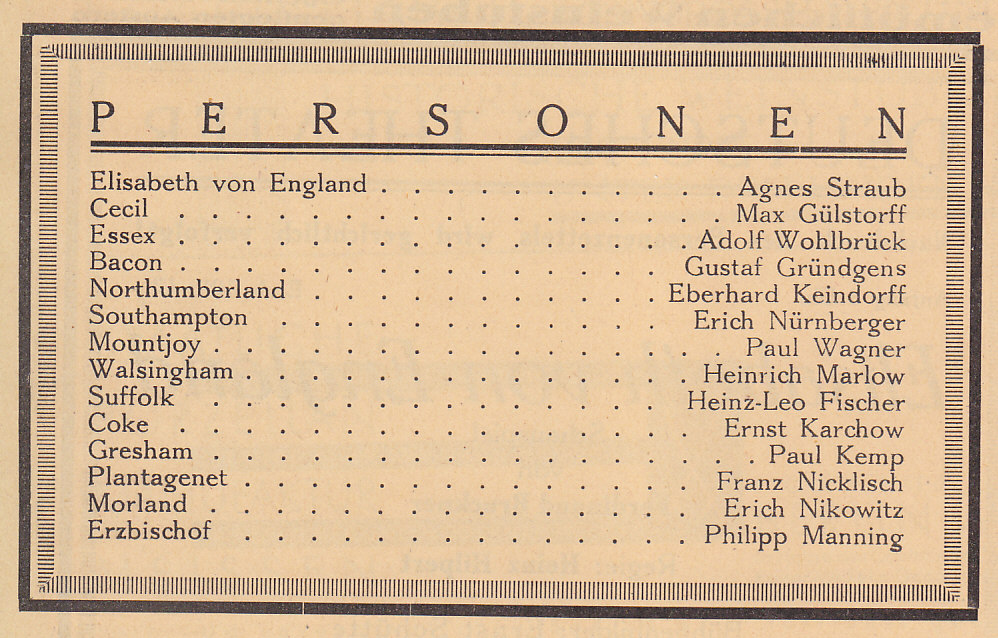 During the 1930s Gülstorff became a familiar face to cinema audiences, appearing in almost seventy films during that decade alone. The album contains promotional film stills from many of these, and even a cursory glance through this section shows that Gülstorff worked with the very best of Germany’s actors and directors, including numerous names familiar from AW’s career such as Adele Sandrock, Gustaf Gründgens, Sybille Binder and Theo Lingen. 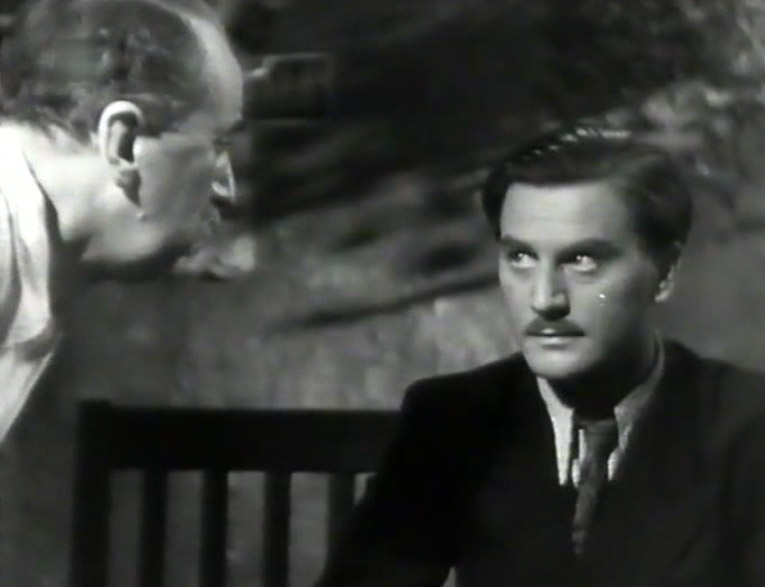 Gülstorff with AW in another scene from ‘Ich war Jack Mortimer’ (1935)
In Ich war Jack Mortimer (Froelich, 1935) he played AW’s prospective father-in-law (above) and there is a photograph of Wohlbrück taken around this time on a loose page inside the album. Unlike AW, Gülstorff remained on in Germany during World War Two. He made a couple of films after the war, but died in Berlin on 6 February 1947 at the age of 64 and was buried at the Lichtenrade cemetery.  The full post is available to read here, and the original Gülstorff album is currently on display in the lower gallery of the museum.