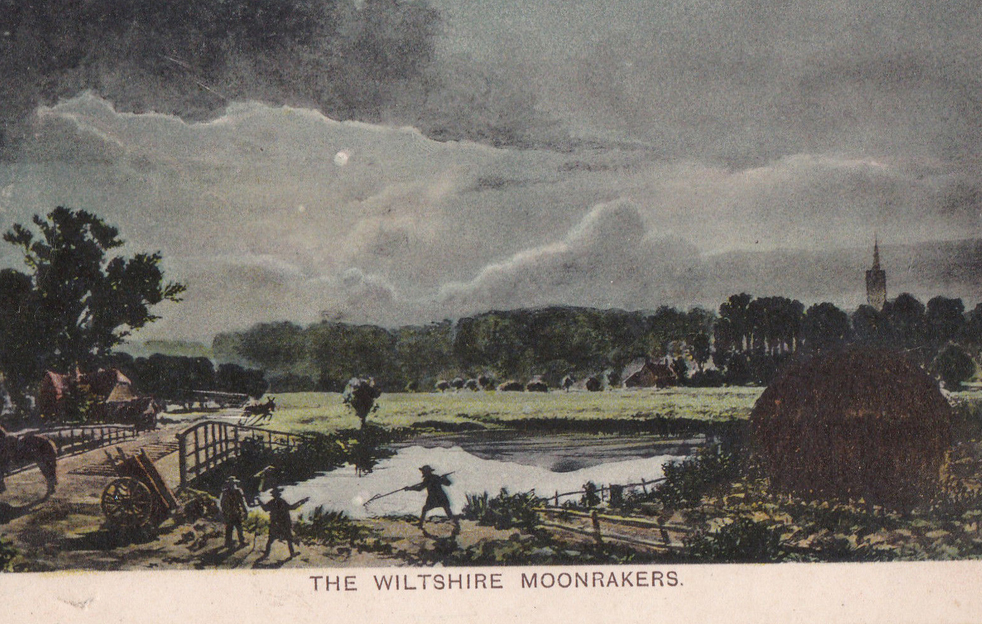 In the summer of 1979 I went to see the latest James Bond movie, for the first time unaccompanied by my parents. They were not at all pleased when I returned home and repeated many of the film’s double entendres with innocent delight, but at the time I thought it was a great film with a catchy title.

Many years passed before I discovered – by chance – that the name Moonraker had not been dreamed up by the film-makers.  The story of a hijacked ‘Moonraker’ space-shuttle capitalised on the renewed interest in science fiction that followed in the wake of Star Wars (1977) – but the original Moonraker story belongs to a period when even the steam engine was in its infancy.  It was also a time when smuggling was rife in England, which provides the context of the story. 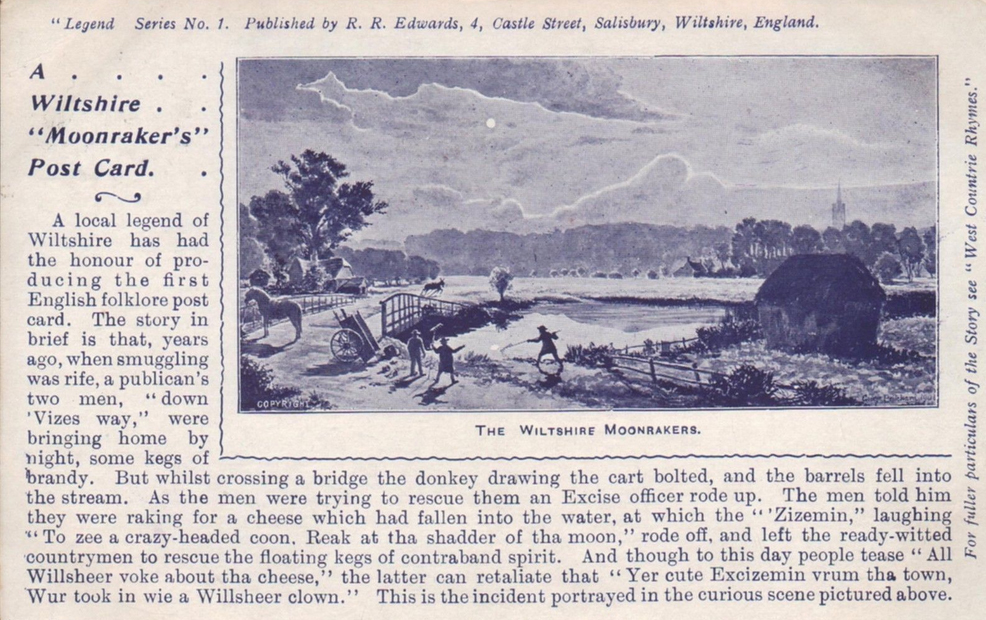 This was the first of Edwards’ series of postcards on county legends. Later ones included a Yorkshire ghost (No.3), ‘Essex calves’ (No.4) and ‘Devonshire Dumplings’ (No.11)
For most people the mention of 18th century smuggling conjures up images of barrels being landed on remote beaches under cover of darkness, secret passages in caves and so on, and it is often forgotten that such contraband then had to be transported long distances overland to be sold in towns and villages throughout the country. 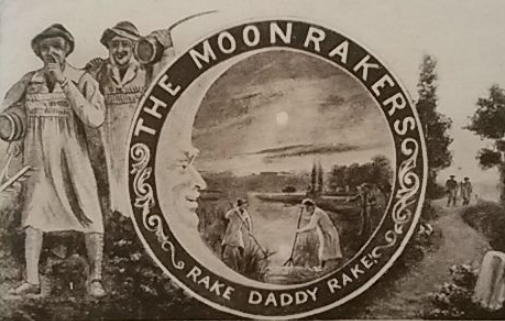 Wiltshire’s location placed it on the route between the coastal landing places of the west country and southern shores, and the lucrative markets in the central counties of England. According to the story, the residents in a village in Wiltshire – Devizes perhaps, although some versions claim it was Bishops Canning – were in possession of barrels of contraband French brandy on a brightly moonlit night when they learned that a customs & excise official was in the vicinity. The barrels were thrown into the village pond, and once the excise man had left, the villagers returned with hay rakes to retrieve them. Unfortunately, the excise man reappeared without warning and spied the men raking the pond. When he asked for an explanation, they replied that they were trying to rake out the large cheese they could see in the water. The customs man, seeing the moon’s reflection on the surface of the pond, laughed at the naive rustics and rode away. Presumably he spread his story far and wide and the ‘moonraker’ nickname became attached to the inhabitants of Wiltshire. 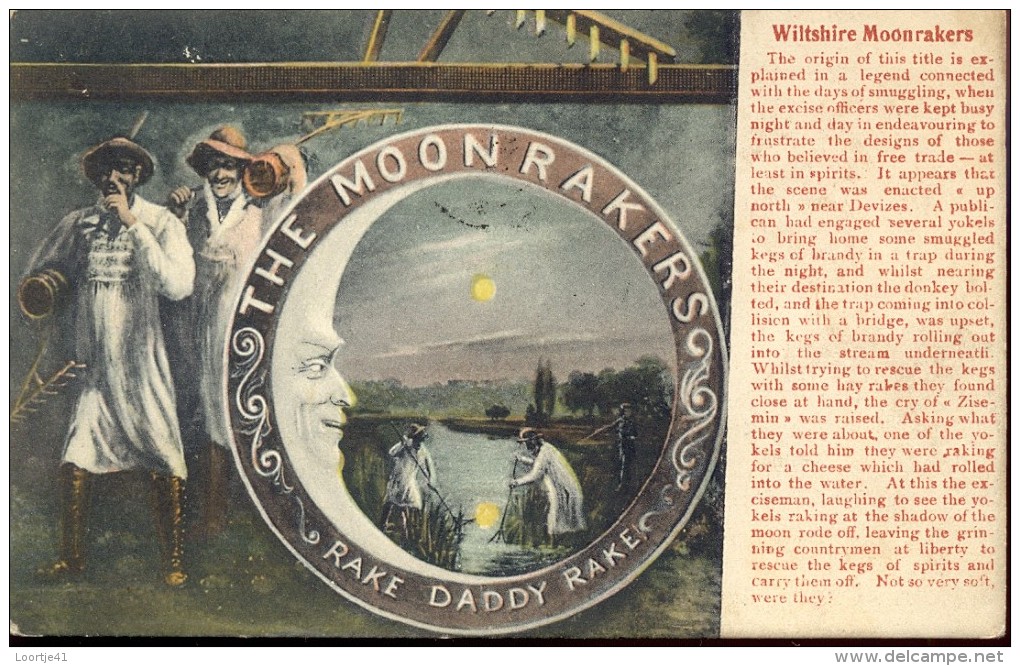 There are, inevitably, other versions of this tale that suggest the villagers really did believe the moon was a cheese, either from ignorance or drunkenness, and the story of the excise man was added on by Wiltshire folk in order to make them look better. If there is any truth in that, it is certainly a poorer tale.

The story was well enough known by 1787 to be included by the antiquarian Francis Grose in his Provincial Glossary ​(London: S. Hooper, 1787):

It has also inspired artists to portray the story on ceramic plates, murals and paintings such as the one below: 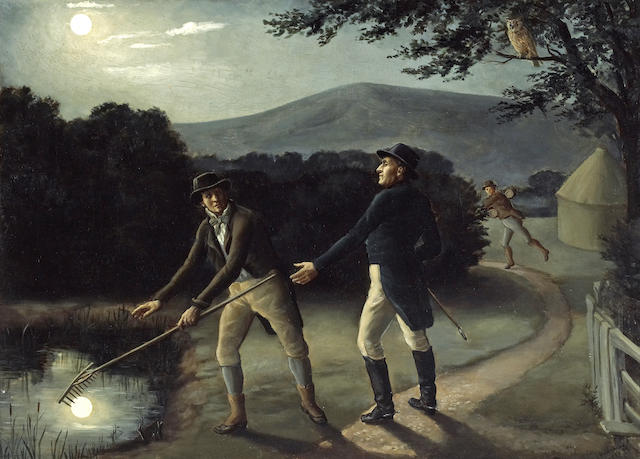 ‘The Moonraker’ (1887) by American painter E.J. Rosenberg
It is on the front of postcards, however, that the moonraker legend appears to have found its most popular medium, and I have seen several variant forms at postcard fairs.  This morning I had another rake around the ‘Wiltshire’ section in the postcard boxes of a local antique shop, but to no avail. Any further finds may well be added here in due course!