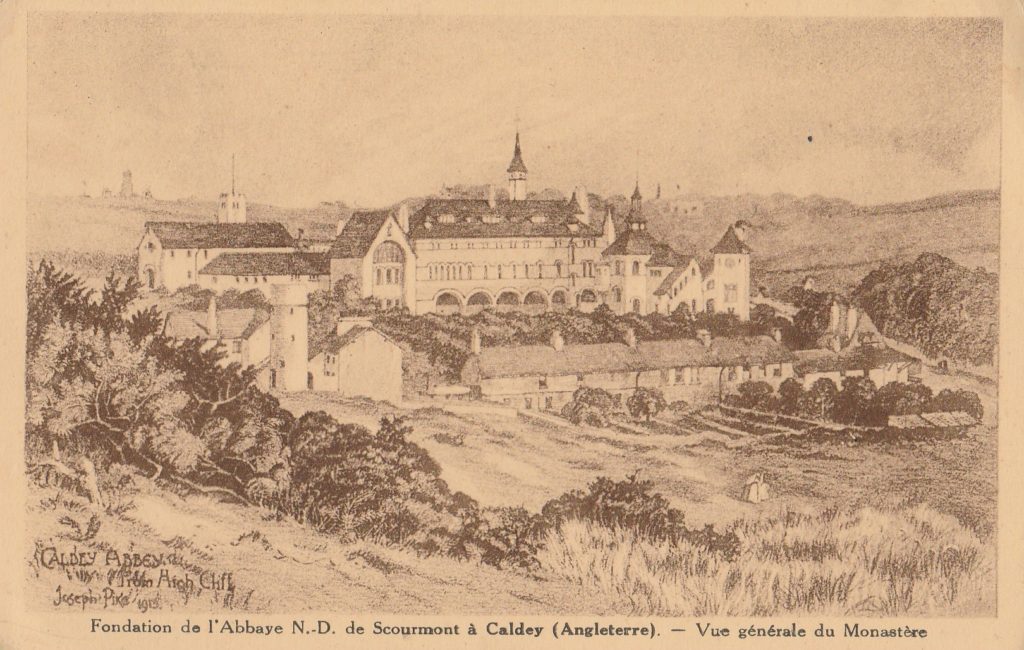 Readers of this blog will already be familiar with my biography of the artist Joseph Pike and my original post about his 1913 set of twelve postcards showing the monastic buildings and other scenes on Caldey Island.  He did those drawings while staying on the island with Bede Camm, who had assisted the Anglican monks in their mass reception into the Catholic Church in March of that year. For various reasons, not least of which were the effects of World War One and the withdrawal of support from High Anglican donors, the community struggled in the years after the ‘Caldey Conversions’. Although Aelred Carlyle was blessed as Abbot of Caldey in 1914, he resigned in 1922 and was replaced by Dom Wilfrid Upson as Prior. I have written elsewhere – in A Monk and His Movies – about Dom Wilfrid’s time in Hollywood. Eventually the monks left Caldey in December 1928 and moved to Prinknash in the Cotswolds. Caldey then passed from the Benedictines to the Cistercian Order, as it became the home of Cistercian monks from Scourmont Abbey in Belgium. This monastery is home to the Chimay brewery, where the monks produce three ales: Chimay Rouge, Chimay Bleue, and Chimay Blanche. While staying in Brittany last summer I was able to pick up a few bottles of Chimay ale in the local supermarket, but a new venue has opened up in Exeter – the South Street Standard – that serves Chimay on draught, which I would definitely recommend. Anyway, I digress – the point of this post was that I recently picked up the postcard above, which is obviously been printed for French-speakers interested in the abbey, and reveals that the Trappist monks of Caldey re-used Joseph Pike’s postcards after 1929. They have printed additional French text in the border space at the bottom and appear to have given the card a deeper sepia tone than the original. I wonder if the artist continued to receive payment for the reproduction of his artwork on the same terms as he had arranged with the Benedictines?