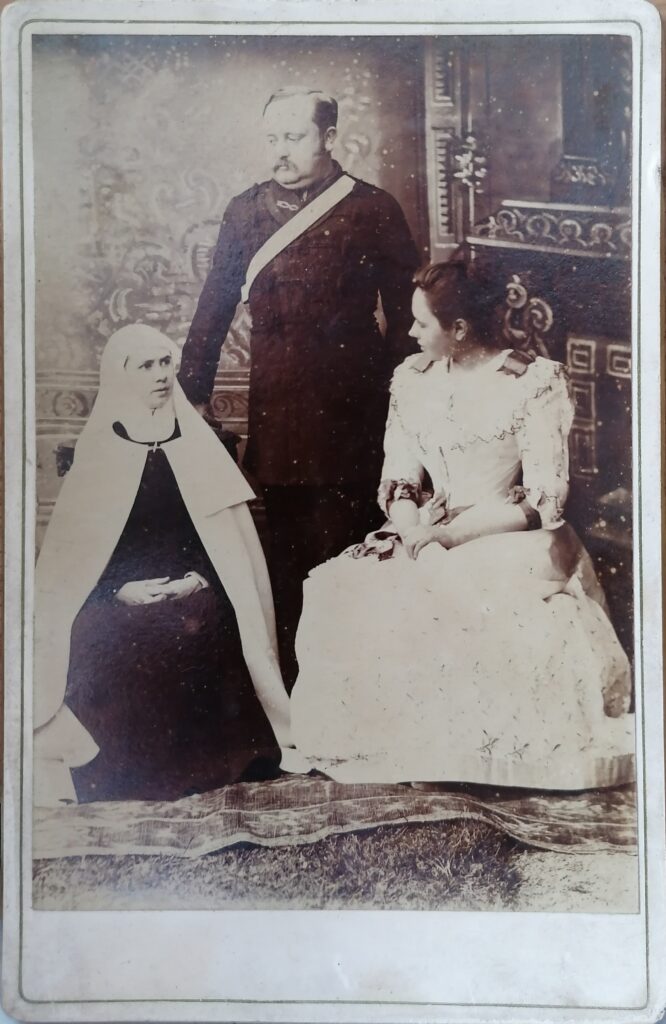 This week’s carte-de-visite is actually a cabinet card, the larger format version (typically ​4 1⁄4 by ​6 1⁄2 inches) which gradually displaced the smaller cards during the 1870s and 1880s. Over the following decade or so, the popularity of both forms declined as Kodak and others made amateur photography more accessible, thus reducing the reliance on studio portraiture.

This portrait follows on naturally from the previous carte-de-visite image of Canon Vavasour, as it also depicts a scene from Catholic religious life. The back of the card is blank and there is no information to provide any details about the location or the date. A few observations can be made nonetheless.

The portrait shows a young nun sitting with – presumably – her parents, and it is therefore likely that this was taken on one of two special days – either her admission to the novitiate, or the occasion of her simple profession.  There are various stages in religious life, the length and name of which varies between the different religious orders and congregations, but the normal sequence runs along the lines of:

The nun in the portrait is wearing a Carmelite habit and the white veil indicates that she is either a novice or in temporary vows. Those in solemn vows wore black veils. There is no difference, I think, between the habits worn by Carmelite novices and those in simple vows, which makes it hard to determine what the occasion was. In the 19th century Carmelites were strictly cloistered and contact with family was extremely rare. When visits were allowed, these would take place in the parlour with conversation conducted through a wooden grille. The fact that this nun is sitting with her family underscores the special nature of the event.

The backdrop is clearly artificial, and at the bottom of the photograph it can be seen that they are actually seated outside, on grass. They were likely photographed in the convent garden, although whether or not the family were actually allowed inside the enclosure is hard to judge.

One interesting feature of this image, however, is that none of the sitters are looking at the camera. This might have been deliberate – an attempt by the photographer to make the scene look natural, as if they were captured in conversation rather than staring fixedly at the lens – or it may have been accidental, the sitters being momentarily distracted by a chance remark just before the shutter clicked.

With regard to the location, there is something about the parents’ dress that suggests they are European, perhaps French. The man appears to be wearing a military jacket, with heavy horizontal braiding reminiscent of the uniform of a hussar. The significance of the white (?) sash and the pinned badge are unclear, so any comments on this would be most welcome.