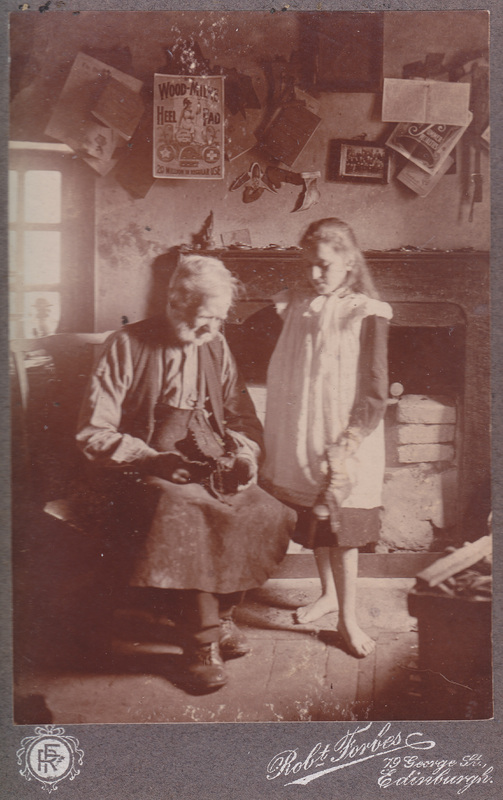 I’m cheating again this week by posting a cabinet card rather than a cdv. (Although I don’t anticipate any complaints, if anyone wishes to do so, they send their postcards to the usual address…)

The photograph was probably taken in the early 1900s, as Robert Forbes is known to have run his business from 79 George Street from 1903 to 1910. Although he operated as a professional portrait photographer, the picture above was clearly taken outside the studio – presumably in the house of the cobbler, unless the scene is completely staged.

At first glance one might imagine that the photograph is an illustration of the old proverb, ‘The cobbler’s children are always the worst shod’, but a closer look reveals that the girl is holding one of her boots and socks in her hand, and is therefore the owner of the boot that the cobbler is repairing. Regarding the rest of her clothing, she is wearing a white pinafore of the type that was popular for girls from late in the nineteenth century through till the time of the First World War. It was meant to protect her dress from getting grubby, as the cotton was easier to wash.

In the background an advertisement for Wood Milne Heel Pads is visible. This was a British company, founded in 1896, which manufactured rubber goods including shoe heels, golf balls, car and motorcycle tyres, Also suspended from hooks on the wall are notebooks, photographs and cut-out pictures of footwear. It is intriguing to see large stone slabs stacked up in the fireplace. This jumble of miscellaneous workaday objects reinforces the impression that this is an authentic setting, although this does not exclude an element of careful staging.

A clue about this can be found in the National Archives at Kew, which holds three photographs that Forbes originally deposited in the Copyright Office in 1903:

‘”The Widow’s Mite,” taken at the entrance to Culross Parish Church. Old lady with little child dropping in penny in the collection plate and looking up into the presiding elder’s face. Two figures entering church’.

The title and descriptions suggest that the photographs were imitating the genre paintings which had been so much in vogue during the Victorian era. These pictures depicted everyday domestic scenes in a realistic manner, but were often coloured with a touch of sentimentality. They were not allegorical, but sometimes the artist wished to illustrate certain moral themes or quaint character types.

The photographer had a personal link to the setting of The Widow’s Mite for his parents, Thomas and Catherine Forbes, lived in Culross. Robert was born in Edinburgh in 1879, and later married Florence Ethel Pursey; they had eight children (three sons and five daughters.) At the outbreak of the WWI he joined the Highland Light Infantry and served with them until the end of the war. The family then moved to Street in Somerset, where their youngest child was born, and where Forbes continued to work as a photographer.