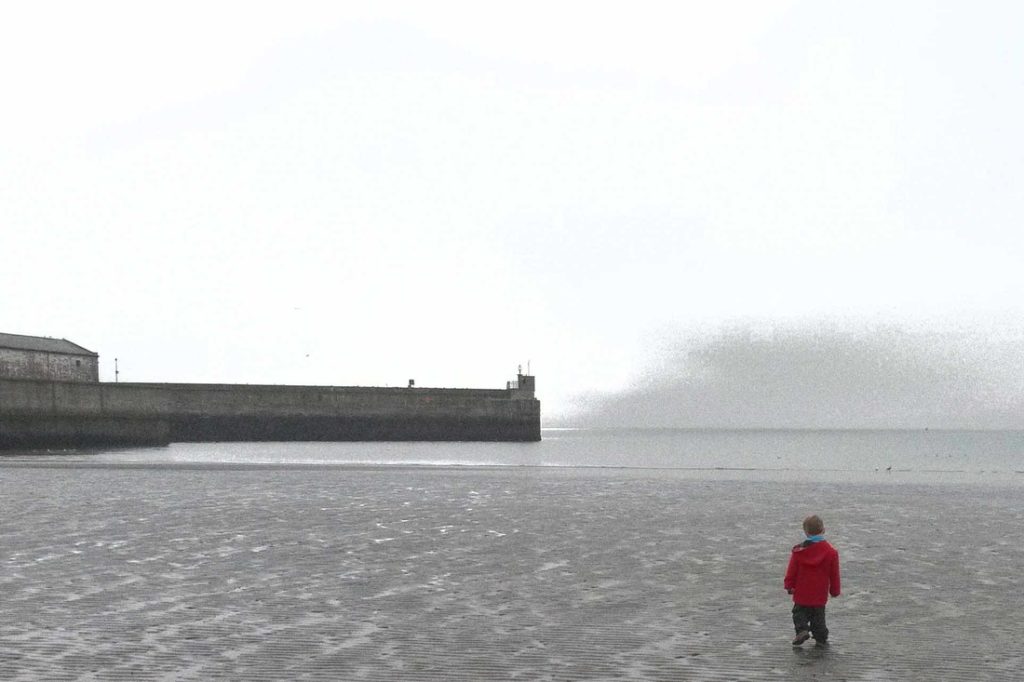 Kirkcaldy sea front, April 2015
This month sees me back in Scotland for a few days, and the first leg of the journey has taken me – somewhat unexpectedly – to Kirkcaldy. It’s not a town I know well – in fact, my one abiding mental association with the place is a poem, ‘The Boy in the Train’, which I once recited as a party piece:
Whit wey does the engine say ‘Toot-toot’?
Is it feart to gang in the tunnel?
Whit wey is the furnace no pit oot
When the rain gangs doon the funnel?
What’ll I hae for my tea the nicht?
A herrin’, or maybe a haddie?
Has Gran’ma gotten electric licht?
Is the next stop Kirkcaddy?There’s a hoodie-craw on yon turnip-raw!
An’ seagulls! – sax or seeven.
I’ll no fa’ oot o’ the windae, Maw,
Its sneckit, as sure as I’m leevin’.
We’re into the tunnel! we’re a’ in the dark!
But dinna be frichtit, Daddy,
We’ll sune be comin’ to Beveridge Park,
And the next stop’s Kirkcaddy!Is yon the mune I see in the sky?
It’s awfu’ wee an’ curly,
See! there’s a coo and a cauf ootbye,
An’ a lassie pu’in’ a hurly!
He’s chackit the tickets and gien them back,
Sae gie me my ain yin, Daddy.
Lift doon the bag frae the luggage rack,
For the next stop’s Kirkcaddy!

There’s a gey wheen boats at the harbour mou’,
And eh! dae ya see the cruisers?
The cinnamon drop I was sookin’ the noo
Has tummelt an’ stuck tae ma troosers. . .
I’ll sune be ringin’ ma Gran’ma’s bell,
She’ll cry, ‘Come ben, my laddie’,
For I ken mysel’ by the queer-like smell
That the next stop’s Kirkcaddy!

The author of the poem, Mary Campbell Smith (1869-1938), was the daughter of the Rev. Andrew Edgar, D.D., minister of Mauchline in Ayrshire. She was born on 3 January 1869 and went on to marry George Smith, a teacher at Rugby who was appointed headmaster of Merchiston Castle School, Edinburgh, in 1890. They used to take their summer holidays in Elie on the Fife Coast, and while travelling there by train one year they had in their carriage a noisy young lady who was continually asking questions: his constant chatter provided the raw material for the poem, written in 1913 and published in the Merchiston school magazine The Total Eclipse. It wasn’t long before it become more widely known, finding its way into anthologies of Scottish verse. The poem is even reproduced on a board at Kirkcaldy railway station. The ‘queer-like smell’, it must be said, no longer hangs over the town like it did in 1913: this was a notorious by-product of Kirkcaldy’s once-thriving linoleum industry, centred upon seven factories that have long since closed their doors.  The impressive facade of William Nairn’s linoleum works on Victoria Road still stands, although the huge building behind was demolished last year. The glory, like the smell, has now departed.