Following on from last week’s post, during our stay in Fife I was surprised (but why?) to find that the council-run Kirkcaldy Galleries was hosting an exhibition of the work of photographer Diane Arbus (1923-71.) It reminded me of my visit to the island of Capri five years ago, when I stumbled across an exhibition of original Leni Riefenstahl prints in a small room tucked away in a cobbled alleyway behind a church. It had the added bonus of being free, as is the one in Kirkcaldy. 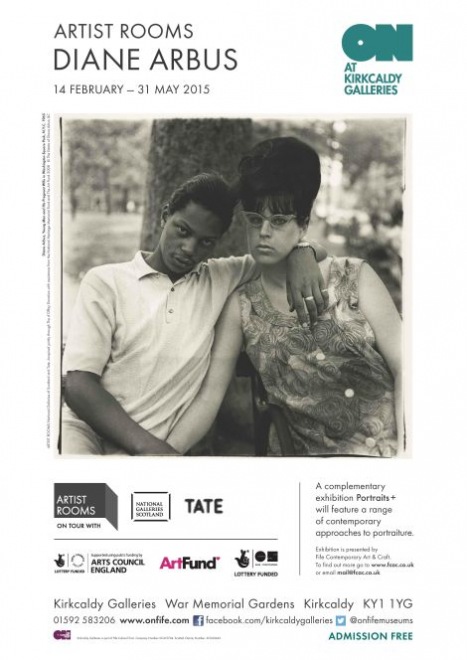 Exhibition poster. The photograph shown is Arbus’ ‘A Young Man and his Pregnant Wife in Washington Square Park, New York City’
Born into a wealthy Jewish family of the name Nemerov, Diane began using a camera in partnership with her husband Alan Arbus, running a fashion photography business. From making images of conventional beauty and desirable opulence, she gradually moved away to concentrate on those at the opposite end of the social spectrum – those on the margins of society, including circus performers, transvestites and people with physical deformities – including the sort of human zoo pictures that I wrote about in an earlier post. In the last two years of her life, she was allowed access to mental institutions where she produced a series of images – both poignant and disturbing – of the mentally impaired inmates. 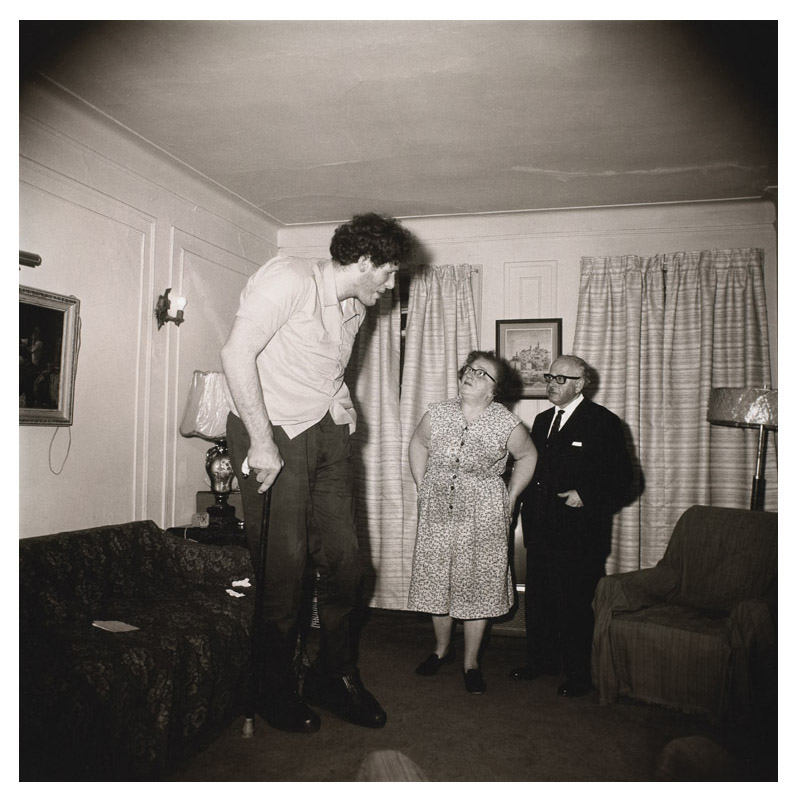 ‘A Jewish giant at home with his parents in the Bronx, N.Y’ 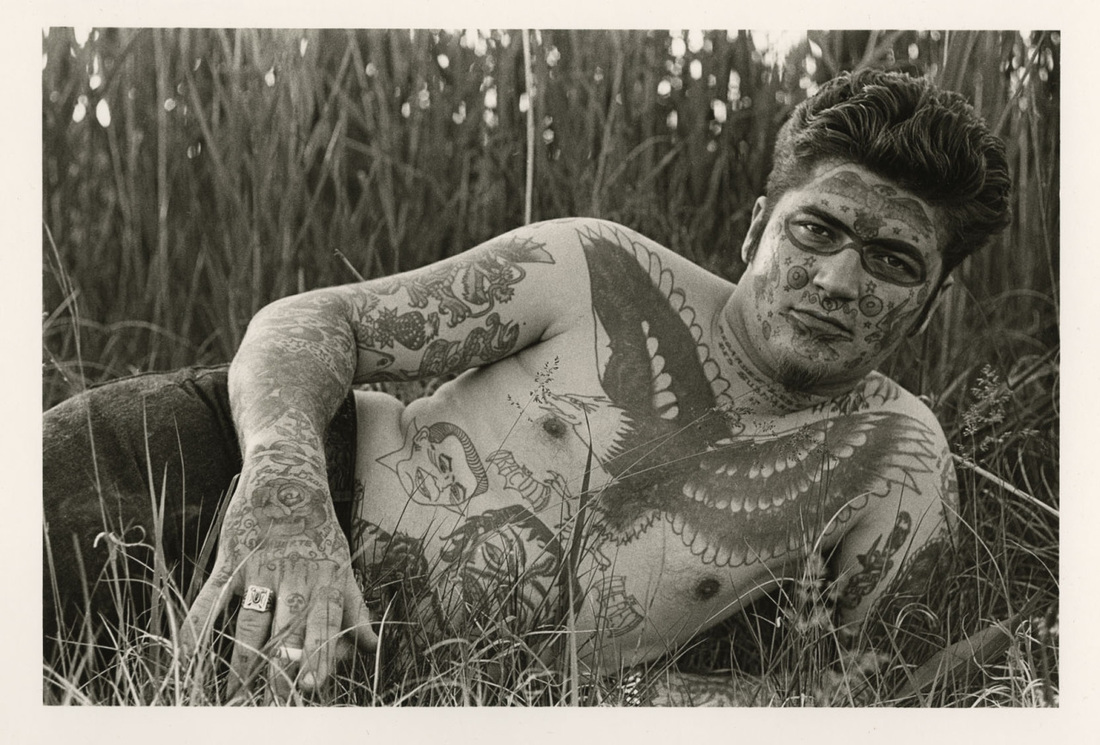 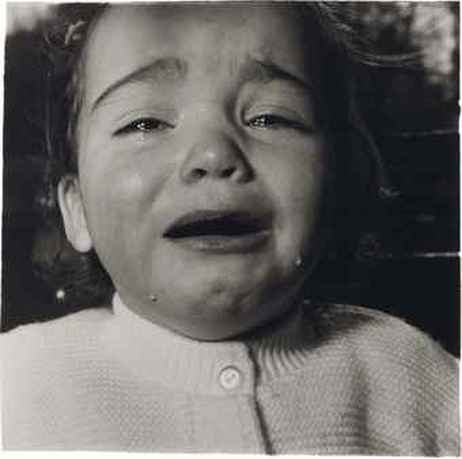 The image above, like the majority of Arbus portraits, is taken face-on, so that the viewer has a direct confrontation with the subject of the photograph. It is this aspect of her work, as much as the content matter, that is so unsettling. There is no opportunity to avert the eye, to focus on another portion of the image and try to alter the perspective. Unlike her early fashion shoots, these are not contrived studio sessions but are taken in the sitters’ own homes, institutions or workplaces, so that it is we who find ourselves in unfamiliar settings, alienated, confronted with people and places that may make us uncomfortable. The fact that many of her sitters appear quite at ease with their physical or mental awkwardness, or even proud of their disfigurements, challenges us to identify who it is that has the real problem.

However, not all the sitters appear comfortable with being photographed, and in the case of those with severe mental disabilities it is evident that their consent was never – and could never – be obtained. The photographer’s troubled life – after several bouts of depression Arbus committed suicide at the age of 48 – invites connections with these images of loneliness, marginalisation and suffering. Does evidence of her own unhappiness demonstrate a degree of affinity or sympathy with those she photographed? There is an honesty about her photography that undermines accusations of voyeurism or exploitation, although such charges have been made. Influential critic Susan Sontag expressed her unease about Arbus’s work in her 1973 New York Review of Books article ‘Freak Show’, which was later revised to form the central essay in On Photography (1977.) Surprisingly, for such a respected writer, Sontag never really strikes home with any critical insight about Arbus’s work. The essay is effective in articulating Sontag’s negative response, but reveals little about the photographs themselves. Her main charge – that of a lack of compassion – has ‘stuck’ nonetheless, and it is no simple matter to dismiss.

One might argue that developing a ‘lack of compassion’ is an occupational hazard for any photographer working in the documentary tradition, particularly those commissioned to record scenes of suffering in war zones or disaster areas. Maintaining a high degree of detachment is essential for professional standards: but where does one draw the line? And does the practice of enforcing such discipline not run a risk of psychological self-harm? The story of Kevin Carter (1960-94) remains a salutary warning; the life, work and death of the South African photographer was dramatised in the film The Bang-Bang Club (Steven Silver, 2010) and inspired Alfredo Jaar’s unbearably moving art-installation The Sound of Silence (2006.)

Diane Arbus’s life has also been depicted on the big screen, providing the inspiration for the film Fur (2006) directed by Steven Shainberg. Like his earlier Secretary (2002) it is an audacious portrayal of a woman’s unorthodox desires, but as a portrait of Arbus it is unsatisfactory. Those wanting to know more about her should begin by studying her photographs – and for anyone in the region of Kirkcaldy, their exhibition remains open for another month, until the end of May. 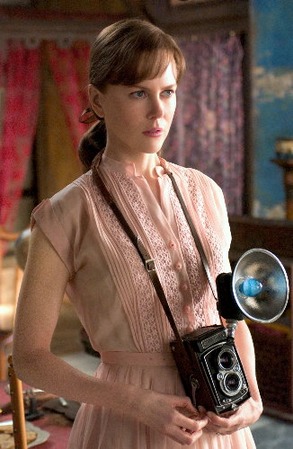 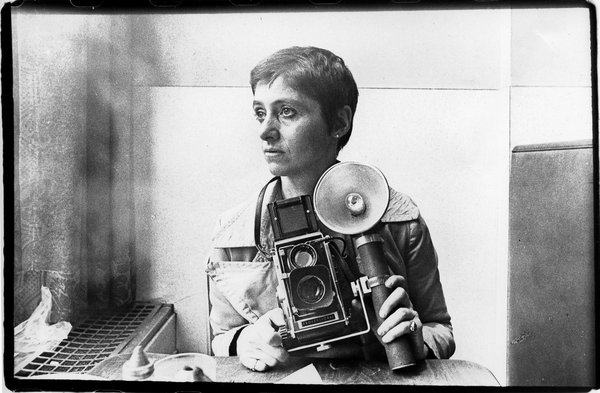 The real Diane Arbus
For those interested in seeing more of Diane’s images, along with information about gallery exhibitions and sales of her work, check out this Diane Arbus page on the Artsy website.