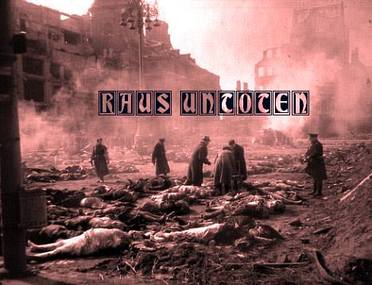 My latest foray into the world of fiction is a short story, Shadows in the East , which will appear next year in the third volume of a new anthology, Raus, Untoten! published by Fringeworks.

Raus, Untoten! is – as the title suggests – concerned with the German undead: including, but not limited to, that curious creature in horror films, the ‘Nazi zombie’. The editor of the anthology, Matthew Sylvester, wanted contributors to avoid the usual cliches of the genre and try approaching the subject from from unusual angles. I am dying (pardon the pun) to see how imaginative other authors have been, but clearly there was no shortage of enthusiasm: the anthology will be published in four volumes, as follows:

The authors are an eclectic mix from both sides of the Atlantic and include Warhammer novelist Graham McNeill, and choreographer David Thomas Moore.

Matthew Sylvester has also written a story for the first volume. He interviewed me the other day, and our discussion can be read on his website at http://matthewsylvester.com/2013/08/23/author-interview-james-downs

My contribution was inspired in part by my fascination with the workings of German film studios during the 1930s and 1940s, particularly the vast complex at Babelsberg, home to UFA. I have seen many photographs of the studio buildings, both interior and exterior shots, and felt that these could be the ideal setting for my story. Originally, I intended there to be much more cinematic content, with allusions to Doktor Kaligari and other film themes woven into the narrative; as the story developed, it moved in a different direction and some of this material fell by the wayside – possibly no bad thing, either. Sometimes what writers want to write is not what their readers want to read, and there comes a point when an author has to decide who he wishes to please. I am hoping the anthology will be well received and look forward to posting more news about its progress here.