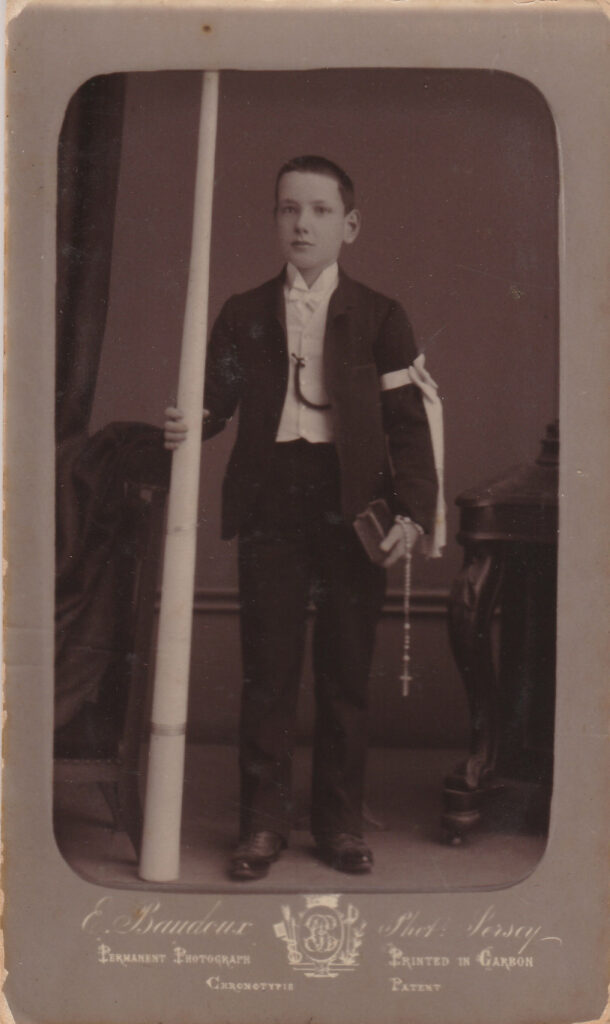 This week’s carte-de-visite continues the religious theme, in that the subject of the photograph – a young boy, apparently named Alfred – is shown carrying a prayer book and a Rosary, suggesting that this was taken on the occasion of his First Holy Communion. In one of Baroness Orczy’s ‘Scarlet Pimpernel’ novels, Sir Percy Strikes Back (1927), she describes the young lad Amédé wearing for his First Communion ‘an exquisite cloth coat with brass buttons, a silk waistcoat, buckled shoes and a white ribbon sash on his left arm.’ The significance of the large white pole held in his right hand is unclear to me, however. It looks rather like a narwhal tusk, although perhaps it could have been a processional pole for a banner – but why show the pole and not the banner? Perhaps a reader can help?

The Catholic population on Jersey increased rapidly following the French revolution as thousands of Catholic clergy and emigres fled to the island in the wake of persecution. Further secular legislation in 1880 forced another wave of members of religious orders to leave France, and in October of that year two priests from the Missionary Oblates of Mary Immaculate were among those who came to Jersey. Over the next few years they raised funds to build a church for the Catholics of St Helier, and St Thomas was opened in October 1887, possibly not long after this photograph was taken. Despite the large influx of French emigres, St Helier was a predominantly English-speaking town, and certainly the name ‘Alfred’ suggests that the boy was of English rather than French background.

The photographer, Ernest Baudoux (1828-1897), was  a French emigre, although he had been running a photographic studio in St Helier since 1869. He was joined by his son, also named Ernest, in 1885, so the inscription ‘E. Baudoux & Son’ on the reverse of the card dates this image to somewhere between 1885 and 1887, when Baudoux sold his business to an English photographer named John Stroud. The latest known negative number listed on the excellent historical website relating to the Channel Islands, ‘The Island Wiki’  (https://www.theislandwiki.org/index.php/Ernest_Baudoux) is 36532, whereas this cdv is numbered 37548 – suggesting that this must be one of the very last photographs taken by Baudoux before winding up business.

The front of the card proudly states that the photograph was taken using the chromotype process, and was ‘printed in carbon.’  There were various versions of this process, patented by Joseph Swan and others, and practitioners needed to pay for a license in order to do so. Although it was therefore more expensive, the results were worth it, as the use of carbon instead of silver gave the chromotype a deeper, richer purplish colour and a hard, glossy, metallic finish. Unlike the sepia toning produced by silver, the carbon prints did not become yellow and faded with age, which explains the sharp tones of this image. For more details, see Audrey Linkman’s article ‘The stigma of instability’ in Photographica World 91 (Winter 1999/2000).